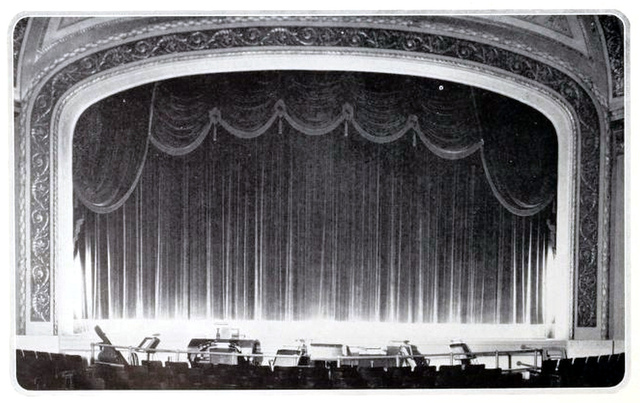 This one-time Bensonhurst theatre stands on 86th Street not far from where the famous car/train scene in “The French Connection” was filmed. The Stillwell Theatre was built in 1927, and was open by March 1928. Interior decorations were by the Novelty Scenic Company. It was equipped with a Wurlitzer 2 manual, 10 rank organ.

The Stillwell Theatre was closed on June 7, 1952, but for many years the name remained painted on a back wall.

When the bowling alley was put in all the theatre decor was taken out. I bowled there also. The alley was destroyed in a fire in the late 1970’s and was never rebuilt.

Roll-o Rama was at one time a Roller Rink and a Bowling alley. My mother spent many an evening there calling Bingo for an organization she was with. She would come home smelling like cigarettes.

The Bowling alley was on the sceond floor. The alley was destroyed in a fire that somehow did not damage the rest of the building.

Don’t they always tell you it’s against the law to yell “fire!” in a crowded theater?
http://tinyurl.com/yglx77

I do remember the flea markets in the 70’s….was dragged there as a boy. I remember being interested in the “oldness” of the place, would walk around and explore. The sign was still up then: “Roll a Rama”.

On December 23, 1954, the Brooklyn Eagle reported that the theater was sold and turned into the Stillwell Outlet Farmers Market. The May 12, 1956 issue of the New York Times reported that the farmers market went bankrupt.

I went there as a kid..I lived about 100 yards away..I payed a nickel when I started going there in about 1942..it was a great place and neighborhood..I would guess I went there 4 to 6 times a month for 10 years..we hung out on steps along the shown wall..they were in an exit doorway not shown in one picture,but in the other one..we had a chinNing bar to do pull ups in the dirt near that side door..my grade school ps101 was a block away..I later went to Lafayette high school a few blocks from there..it was also shown in chase scene in french conection..one of my high school classmates was Sandy koufax..he probably went to Stillwell also..my e mail if anyone wants any more info..

Mintaka, thank you for sharing your memories of the Stillwell. In response to DJM78’s post, this United Skates also closed sometime in the early eighties as well, sometime shortly after the roller skating craze started to die out. I remember Genoveese Drug Store opened in the Fall of 1983, Consumers came in about 1 or 2 years later. The star logo was on the top of the theatre for many, many years after it was gone from the building, it probably was too expensive for the owner at that time to remove.