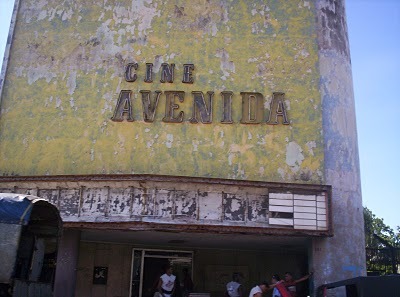 Located in the Marianao district to the south-west of the city. The Cine Avenida was still operating in 1958.

It was closed for many years. By 2016 it had re-opened as a concert venue.

This movie theater was located on Calzada de Columbia (now named Avenida 41) #5614 between Calles 56 and 58, north side of street, in the municipality of Marianao. It is named Avenida after Avenida 41 where it was located. It is erroneously positioned on Lombillo street in El Cerro.

Hi Guarina I came across your post regarding Cine Avenida. I’m planning on a visit to Cuba and I’ve learned that I was born near this theater. It seems you’re very familiar with that area. Would it be possible to chat offline? We came here 50 years ago when I was two and am trying to find family I still have in Cuba. Looking for lead wherever I can find them :)

I remember playing stick ball outside on the back wall. Sometimes the lower seat area close to the screen would get flooded, either from too much rain or the spring that was suppose exist on the vacant lot next to the theatre, on those occasions the managment would install a pump by the first row and drag a hose thru the exit door on stage left which was level with the stage. The fiñes on the block would quietly line up by the open door and watch the show for free. One evening during the showing of Frankenstein, at the precise moment that Frankenstein comes alive my buddy Anel, big tall, slender, black, a wild spirited risk taker character, jumped on stage with arms flailing. I think half of the theatre vacated in a panic. Other times we would crawl along the underground Air conditioned tunnels that led to exhaust registers under some of the seats. Horror movies were perfect for grabbing patrons legs during scary scenes… gustavo f Carrillo

Good morning all. It was amazing to see this photo. Now that more and more people are visiting Cuba. I grew up right there in the building next to the movie theater my family last name is Fleitas and my Mom Anita was friends with the ticket agent. I would see all the crazy russian movies. 1959 – 1969 before I came to the US NYC