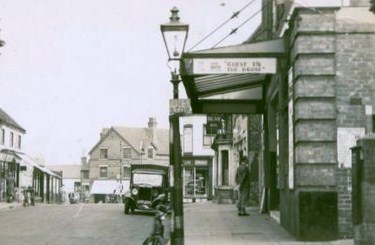 Located in Swadlincote, Derbyshire. The Empire Picture Palace was opened on 26th December 1912 with 500 seats, all on a single level. It presented Pictures & Varietie’s. It was demolished in the 1930 to build the New Empire Cinema which opened in 1931.

The Empire Cinema was closed in the early-1960’s and became an amusement arcade. It became ‘The Paramount’ pub, which opened in 2007 and closed in 2013. By 2017 it is the Empire bar & restaurant and following a refurbishment reopened as the Lounge Bar on 5th October 2018. It was closed on 1st March 2019 and the building is ‘For Sale’.

The old Empire was sold to R.L. Kemp (Cinemas) Ltd in 1930. The New Empire Architect was Alfred Thraves, constructed by J H Metcalf Bros. Doncaster, who were also Directors. Interior decorations were carried out by W.J. Wilson & Son of Mansfield. This was the third cinema to be build by the Kemp Group, the two previous were Majestic Retford October 1927 and Majestic Mapperley October 1929. In May 1933 the group built another Majestic in Swadlincote.