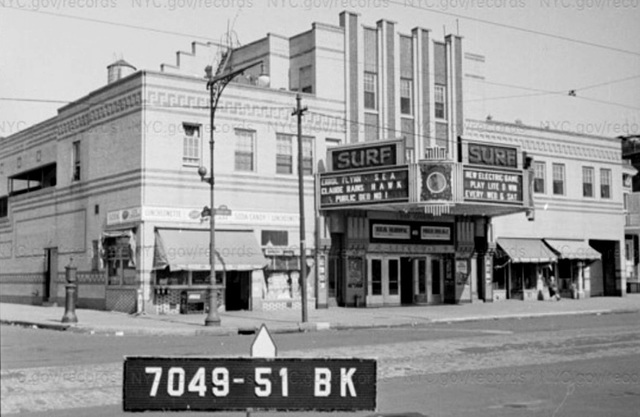 This Coney Island Theater stood many blocks away from the amusement area, the Shore Theater and the Tilden Theater. By 1943 it was operated by Rugoff & Becjer, who were still the operators in 1950.

In its later days it was converted into a bolwing alley before being demolished for new apartment buildings.

Pardon my error. It was the Tilyou, not the Tilden, owned by the same family that owned Steeplechase Park.

The Surf was transformed from a movie house to a bowling alley in 1956.

The bowling alley did not last very long. My dad used to league bowl There and there were many complaints about the condition of the lanes. The building was right off the ocean and the humidity was warping the lanes. This was way back when wood alleys like that were not treated.

In my humble opinion I do not think there will ever be another movie theatre be it a single or a multiplex in this area. The area is mainly high rise apartments with the majority of tenants on public asistance and Seagate has been becoming another Williamsburg section with Hasidic Jews who do not go to movies. The other resident live in the nursing homes and geriatric centers there as well.

FYI: The location of where the Surf was built was originaly a DRAFT BOARD Location in Brooklyn 1918. It was also near the Infamous Half Moon Hotel which was a well known hangout for gangsters such as “Murder Incorperated” It is also believed Al Capone hid out there for a while when things got to hot.

It is a real shame to what has happened to this neighborhood.

I went through the Loew’s theaters in Brooklyn, but didn’t see any in Coney Island. This theater was at the corner of Surf and Stilwell. I would be curious to know if this is the Surf:
http://tinyurl.com/z7ccm