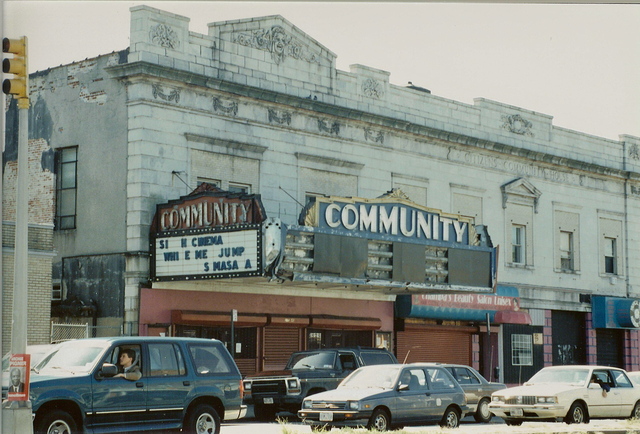 This former theatre started its history as the Community House, a meeting hall, but in March 1925 was converted to a movies policy to the plans of architect R. Thomas Short. It was equipped with an organ. After Century Theaters closed it, it reopened as a twin theatre, the Community Twin Theatre, but closed yet again.

It later reopened again as a twin and showed American and Bollywood fare. Then it finally closed as movie theatre and has come back in its second life as a church.

I worked as a relief projectionist at the Community, Queens and Glen Oaks Theatre in the 60’s and 70’s and when my regular job at the DeMille Theatre in Manhattan burned down in 1973, I went to work full time at Century’s Prospect in Flushing.

Living near the Queens and Community, until today, I also went to the Community, Queens and Belair Theatres on Jamaica Avenue as a child. What I remember MOST about the Community Theatre was the Chase Manhattan Bank next to the theatre. They had a clock outside and when you had to wait outside in the rain, the clock dripped down on whoever was unlucky enough to be standing there on the line.

It’s very sad to see ALL the theatres gone now.

Passed by this theatre today and the snapped a couple of pics. The blue paint on the “COMMUNITY” sign atop the marquee has just about peeled entirely away. The building’s facade doesn’t appear to have had any maintenance performed since the last pics I took back in 2005.

This theatre is falling apart and the Queens Theatre down the street had its outside renovated. I guess you need to run a church to save a theatre today.

Historical report in Queens news weekly can be viewed here

This item is from the March 7, 1925 issue of The Moving Picture World:

“The Community Theatre, Queens Village, Long Island, was opened to the public last week. It is a well-appointed picture-house and has a seating capacity of more than one thousand. Music is furnished by a five-piece orchestra, under the direction of Fred Dressel, and a $12,000 organ. The program is changed every two days. The theatre is controlled by the Citizens' Community House, Inc. The house is under the management of Joseph Merck. The performance is continuous from 1:30 until 11 P. M.”The article at Comfortably Cool’s link identifies R. Thomas Short as the architect.

R. Thomas Short was sort of “house” architect for the circuit eventually known as Century, which turned the meeting hall into a cinema and was the first to run it. I suspect that Short was responsible for the renovations, and not “architect” from the ground up.

At one time the Mount Bethel Church took over the theater and the rest of the building. It now appears to be closed and there is some scaffolding where the entrance was.

Interestingly the Century Management Corporation was housed in the building; presumably the same Century as the circuit. This was leased property because any theater that Century had built could not be used to show movies by a subsequent owner according the the closing agreement.

I used to spend many Saturday evenings with my parents at this theater from December 1990 to December 1991.

At that time, it was known as the Jodha Community Cinemas, named after the manager, Ram Jodha, and we saw a lot of memorable Bollywood films, along with a few Hollywood films, as well.

Despite so much crime taking place in that area and in the rest of the city, this theater really was a magical escape to heaven.

There was one blue theater #1 and a golden-brown theater #2. We stopped visiting because the heating system was not working, but I still enjoy watching some of those movies at home, even after all these years.

At that time, we used to live in Flushing, so it was always an exciting drive to this theater. Now, I live up the road in Queens Village, but the present-day church just doesn’t have the same charm that I always remembered and that is very unfortunate. :(