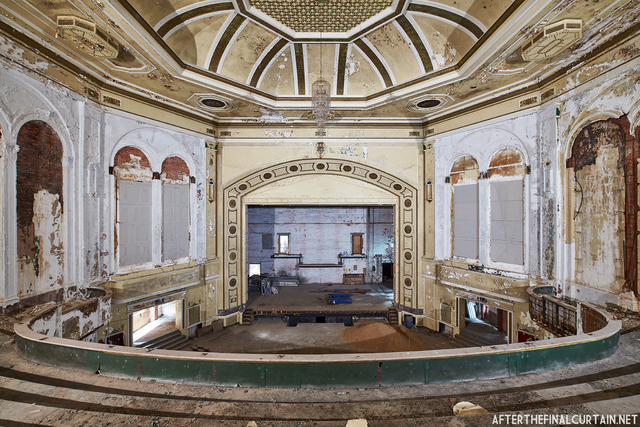 It was then restored and reopened in February 1990 as a concert venue named the Queens Theatre, but despite top names appearing such as Kool & the Gang, Frankie Vali & The Four Seasons, Jerry Lee Lewis, The Marshal Tucker Band & Watlon Jennings, it never really took off and sadly closed in late-December 1990.

On October 2, 1993 it was taken over by the New York Deliverence Gospel Temple and they purchased the theatre in January 1995. They sold it to the All Nations Apolostic Tabernacle in September 2006, but apart from scaffolding the facade and removing the balcony fire escapes and all the seating, the building sits unused and was put on the market ‘For Sale" in early-2019.

anyone out there still alive that remembers the old Queens Theater

Well, obviously I do since I uploaded the picture. I lived in Bellerose and often walked to Queens Village for one reason or another. Especially at night it was a sight to see the lit vertical when I passed the bend in the road. I believe I was only in the theater twice, once each in the orchestra and the huge balcony. One movie was Say One For Me. In the days of the old steam engines you really knew when a train went past.

What is the current status? A church bought it but the last time I was by a year or so ago there was still scaffolding on the front and the fire escapes had been removed. The latter seemed odd since the church originally was counting on using the full capacity.

I have not been backed to Queens Village in over 40 years. Living now in Florida. I worked for Century theaters in 1952 to 1968 as assist mgr.and then as mgr.then later became a projectionist with Local 640.I have fond memories of Queens Village as I lived on 220th St. back in 1943. Next time I get up to NY I will try to visit the old village. Thanks for your note. Stay well. Regards, Artie

So all these years later the building is still being renovated. It was supposed to be a church with a seating capacity about the same as when the building was a theater. But they took down the fire escapes to the balcony which, if I’m correct, had more seats than the orchestra. Go figure.

An ad as an adult venue appears in the Newsday Vault Classic edition of May 18, 1983 so life existed past that shown in the blurb.

It appears as though the renovation work has been stopped for some time. The scaffolding is in place and the facade is boarded over.

A few years ago I was allowed to photograph the Queens Theatre. Check out some of the photos and a short write up at After the Final Curtain.

The latest edition of the Forgotten New York website has a short article on Queens Village, including a color photo and update on the still shuttered Queens Theatre. Click here