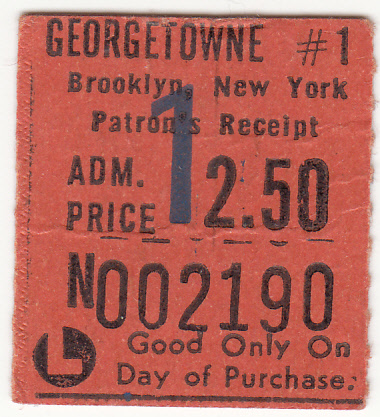 The former Loew’s Georgetowne Twins was a modern twin theatre which opened on August 14, 1970 with Elliott Gould in “Getting Straight” with the movie playing on both screens. It was the first twin theatre to operate in Brooklyn, and was part of the Georgetowne shopping center on Ralph Avenue. The two large theatres were piggy-backed and for years showcased first-run movies. A large mural in the foyer measured 14ft x 50ft and depicted ‘a melange of portraits of movie stars of the past’. It was the work of artist Patrick Casey of Rochester, NY.

On October 21, 1993 Loew’s closed the twin. Part of the building was then converted to retail space and became a Party Warehouse. Yet for years, nothing was done to the two-storied glass entrance and the space inside, which still looked the same as when it was a movie theatre.

I saw Saturday Night Fever there and also had one of my first sexual experiences in the last row of the place. Sad it’s gone.

Its people like you Sampson that closed this theater

I’m not sure how long this real estate listing link will last, but here is a great pic of the Georgetown theater most likely taken in 2017. As of December 2018 half of the space is now a medical office. Copy & Paste link, then click on the photo for a full view. –> https://42floors.com/us/ny/brooklyn/2183-ralph-ave?listings=1262403 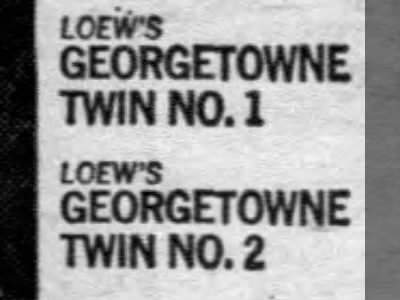 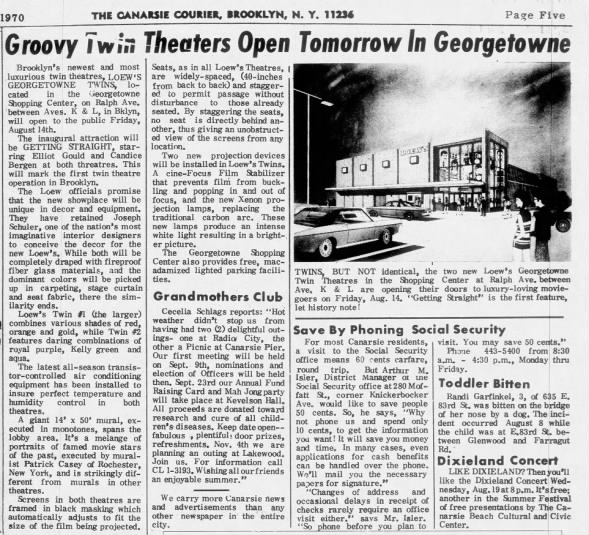 Uploaded actual photo of the theatres.

When I was 12 in the Summer of 1980, I lived in Starrett City. My friend John said, “hey want to watch a movie”, and I thought he meant on TV or something. The next thing I knew, we were waiting for a bus, then changed buses and I had no idea where we were or where we were going but it was an adventure, so the dumb kid that I was went along. The next thing I knew, we walked up to this amazing theater. I don’t even remember what we saw because I was so scared we were going to get caught (but I’m pretty sure it was something with Stallone in it). Now as an old man, I know we weren’t actually doing anything wrong. We paid our admission and watched our movie, we didn’t get loud or rowdy or make a mess. But I did it without my parent’s permission and that kept me on pins and needles the whole time. I couldn’t help feeling like someone would say, “I’m telling your mother” and snitch me out. And it was also the first time I rode the bus without a grown up, so that bus ride was exciting too. This led to us going to see lots more movies at the Georgetown. And this first adventure opened the door to more adventures like this before I even became a teenager. We went all over Brooklyn to catch movies that weren’t on closer screens. In the next few summers, We were taking the subway to 42nd St to watch the ALL-DAY Kung Fu movies for $2. I love movies and the old school movie theater experience so much that one of my first jobs was at a movie theater. Now, it’s kind of a hobby of mine to try out different theaters. Whenever I travel, I make a point to catch at least one movie in that area’s oldest theaters. Taking road trips to visit a Drive-in Theater is a completely different animal that I encourage all theater lovers to try at least once. Sure, my parents took me to the movies before to see the flicks they chose. But going without your parents to see the movie you picked felt so grown up for me at 12. And it started with the Georgetown that sparked that joy in me.

Thank you, Decoman. The last one worked as well. That brought back many happy memories.