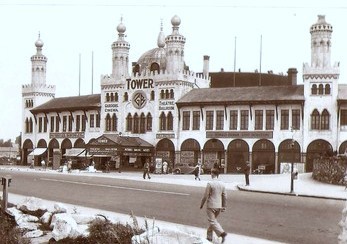 Located in the Lancashire seaside town of Morecambe. The first structure to be built on this 30 acre site was in 1878, when a steel tower was erected, standing 232 feet high. In 1909, the Tower Pavilion was built. Designed in a flamboyant Moorish style, the complex consisted of a 2,300 seat theatre, with seating in orchestra stalls, dress circle and gallery levels, a large ballroom, bars, restaurant, cafe and landscaped gardens. By 1911, films were being screened during the summer months.

The steel tower was demolished in 1914 at the beginning of World War I, and the steel was used to manufacture munitions. In the early-1920’s, the Tower Pavilion was mainly in use as a cinema and became the first in Morecambe to screen double bill programmes. On 1st October 1928, it was taken over by the Denman/Gaumont British Theatres chain. It then ran pictures on the screen, and musical comedies and varieties on the stage. In 1930 a new projection box was installed.

It was closed in April 1949 for extensive alterations, and re-opened on 6th June 1949 as the Gaumont, with 1,200 seats, as the gallery had been closed. The Gaumont was closed on 20th November 1957. It re-opened in 1958 for the summer season only, closing as a cinema on 13th September 1958. It re-opened again in 1959 for the summer season only, this time as a live theatre, closing for good in late-1959. The building was sold by the Rank Organisation in October 1960, and was demolished in August 1961.

A bowling alley was built on the site, opening in 1963. This was later divided, to be used as a cabaret space in the created area. This was closed by flooding in 1982. In 1985, it re-opened as a Granada Bingo Club, which today operates as a Gala Bingo Club.