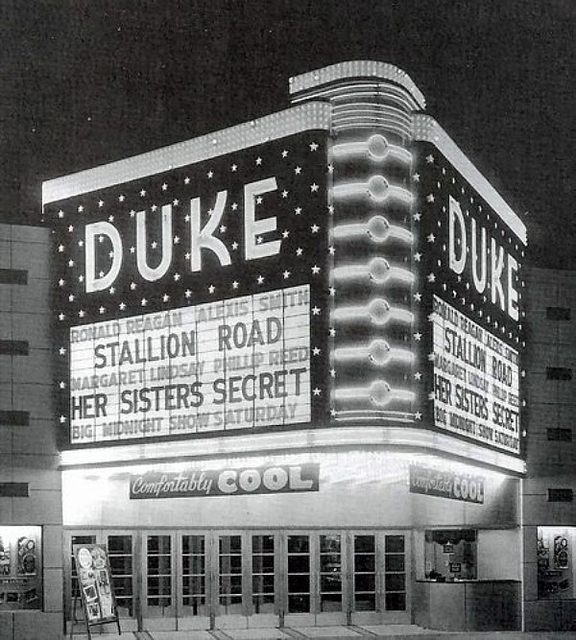 The Duke Theatre was named for jazz great Duke Ellington and was part of the Wisper and Westman circuit, seating about 1,500. It was designed by Charles N. Agree in late-Streamline Moderne style.

Though construction was planned before America’s entry into World War II in 1941, construction did not actually get underway until 1946, and the $300,000 theatre finally opened on May 2, 1947 with “13th Hour” & Kay Francis in “Wife Wanted”.

By this time, however, the television era was beginning, unfortunately for the Duke Theatre, which lasted less than six years before Wisper and Wetsman closed it due to rapidly declining attendance.

Later gutted and used as a bowling alley and later a heating & cooling business, the building stood vacant for years. It was demolished in August 2010.

Bryan can you verify? I think it is still open : View link

Although it was empty, that building was still there as of six months ago. I live not too far from it.

the boards covering the marquee attraction panels have some off, you can see the later enameled panels from when the building was a bowling alley now. It’s abandoned, and like everything else in the area, is probably picked clean of any metal.

Make this one Closed/Demolished; it came down in August 2010. Demolition pictures here.
The building housed a heating and cooling business after the bowling alley closed.

This webpage has pictures and other notes about the Duke.