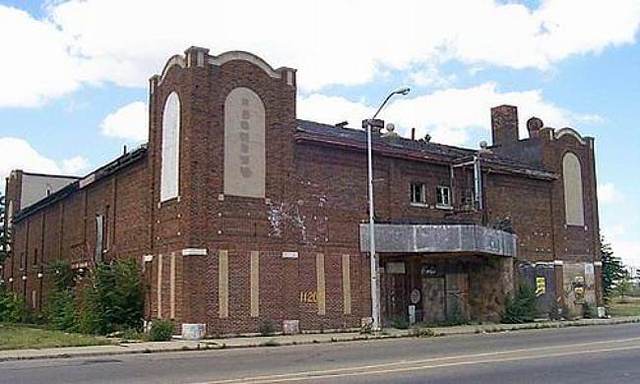 Opened as the Harmony Theatre on December 12, 1921 in was designed by architectural firm Building Design Bureau headed by architect Ernest C. Thulin. The theatre was completely remodeled on October 31, 1941 by C. Howard Crane in Art Moderne style. It not only received a new look, but a new name, as well, the Admiral Theatre.

The theatre was shuttered by the mid-1970’s and was reopened as a church called Brown’s Chapel, but that was also eventually shuttered. The former theatre building has since been converted into office and retail space.

“My mother said she can remember seeing first-run Hollywood movies there in the early to mid-1960’s, but when I started going there in the 1970’s it became the east-side’s kung-fu/blaxploitation and low-budget action and horror movie place! It was funny because I remember half the time you couldn’t hear the movie because people would yell and curse at the screen! Movies like "Shaft”, “Superfly”, “The Mack”, “Blacula”, “Coffy” and “Foxy Brown” were usually shown there as well as the latest Hong Kong chop-sockeys like “5 Fingers Of Death”, “Kung-Fu-The Invisible Fist”, “Duel Of The Iron Fist”, and of course all of Bruce Lee’s movies:“Fists of Fury”, “Chinese Connection”, “Return Of The Dragon” and “Enter The Dragon”. Also, movies like “Walking Tall”, “Billy Jack”, “Death Race 2000”, “Devil’s Rain” and “Dirty Harry” played there too.

There was always a double feature and matinees were like 75 cents or something I think. A lot of people would go there in the summertime just to sit in the air conditioning!"

I still drive by this theatre on my way home. The current renovation has done a lot to stabilize the exterior, and it seems to be on the way to some new life/purpose.
But I also watched what they were doing with the interior. Basically, they gutted it to the walls and I’m not sure what (if any) vestige of this old movie house exist other than the shell of the building itself.
Still it’s nice to see the building have a new life.

Yeah, it would be very very very hard to save the interior, it is very dilapidated, sadly I didnt think the interior would ever survive, even though I have never seen the interior I heard it is real bad. Its great its coming to life though

I was looking for pics for when the admiral theater was first built.
any feed back would be great!

I have a scan of the entrance to the theater when it was Brown’s Chapel. I will upload it soon when I get some time.

It also appears the mystery as to what is happening to the Admiral has been solved:

View link
This redevelopment site is anchored by a market with 11,000 sf of newly remodeled office on 2nd floor offers a unique
opportunity for a variety of retail/office users. There are 4 storefronts that offer excellent accessibility to Detroit’s eastside.

So it appears that the building is office and retail now.

I think status should be closed, as opposed to unknown.

My mother was born just a year after the Harmony Theater opened in 1921. She was born above the bakery (which her father owned) down the block from the Harmony — on the NW corner of Mack and St. Jean. She went to the Harmony as a child and saw 1st run movies for 5 cents. By the way, my mom was named Jean. She attended St. Clair Elementary School (as did I in the 50â€™s), Foch Jr. High, and Southeastern High.
Later, in the 1950’s, we moved back to that neighborhood and lived on a street called Hart (it ran from Mack Ave. south to Jefferson). As you went east from St. Jean, Hart was the last street with homes on it before getting to Conner. As a matter of fact, there were only factories and parking lots on the east side of Hart. When one of the factories closed across the street from us, they opened an Atlantic Mills department store there in the abandoned factory. Last time I was there, Hart was gone completely and a parking lot was in its place. I think all the homes are gone south of Mack from St. Jean east to Conner.
When I was a kid in 50â€™s we went to the Admiral Theater and saw Saturday matinees for 15 cents. Fifteen cents got you three movies and a cartoon. Big candy bars like MilkyWays, Snickers and 3 Musketeers were five cents apiece and a box of buttered popcorn was 10 cents. Boxes of JuJyFruits, Raisinets, or Goobers were also just 5 cents. So, with a quarter allowance, you could go and get entertained for a whole afternoon. In the 50â€™s my favorite movies were science fiction – like The Body Snatchers, This Island Earth, Forbidden Planet, Attack of the 50 Foot Woman, Tarantula, etc. Of course there were also many horror movies at Saturday matinee like – I Was a Teenage Werewolf, Night of the Living Dead, The Tingler, Frankenstein and Dracula. Mixed in with the Sci-Fi and horror movies were the westerns like High Noon and Shane.
On that corner of Mack and St. Jean in the 50â€™s, were a Cunnghamâ€™s drug (SW corner), a 5 and 10 cent store (NE corner), the Bakery (on the NW corner – no longer owned by my momâ€™s family) and a bank on the SE corner.

Here is an item from the March 5, 1921, issue of The American Contractor:

The lead architect of the Building Service Bureau was Ernest C. Thulin.

It appears that some type of grocery store is operating out of the building at present. The roof is in great shape. “Motor City Marketplace Liquor and Lotto”…

This reopened as the Admiral theatre on October 31st, 1941 by Co-Op theatres. Grand opening ad posted.