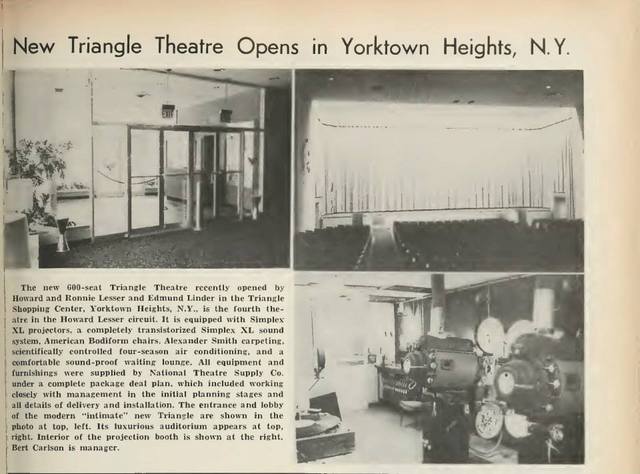 Located in the Triangle Shopping Center. The Triangle Theatre was opened on June 25, 1965 with Burt Lancaster in “The Train”. It was closed in 1989.

Given the location in the Triangle Shopping Center, the Triangle Theatre might have been one of the shopping center houses developed by Ron Lesser Enterprises in the 1960s.

The guide to the John and Drew Eberson papers at the Wolfsonian Institute lists a Yorktown Heights Theatre for a client named Lesser as a 1965 design by Drew Eberson. If there were no other theaters built in Yorktown Heights around that time, it must have been the Triangle that was listed.

I vaguely remember this theater, but I had to submit it, because my father used to take me here to see movies when I was very young. We continued to go to the theatre by the Beach Shopping Center (on Dayton Lane) after it closed. I do remember that it was where the CVS Pharmacy is today, either that whole row of shops or most of them.

To Joe Vogel: Lesser was a booking agent for the independant theater owners in the NYC area. They don’t own any theaters .

In any case, it’s possible that the Ronnie Lesser who was associated with Howard Lesser and Edmund Linder in the Lesser Enterprises theater chain in the 1960s (see the Boxoffice item linked in the earlier comment by Tinseltoes) was not the same Ron Lesser who, in 1974, founded the booking agency Lesser Theatre Services, but there is plenty of documentation that someone named Ron Lesser was developing and operating theaters in the state of New York in the 1960s, and the Triangle was one of his houses.

I think it’s likely that Ron the operator and Ron the booker were one and the same, though. Had Ron Lesser the booker never been a theater operator it seems unlikely that he would have become President of the Independent Theater Owners Association (ITOA) or served on the Board of Directors for National Association of Theatre Owners (NATO), as noted in his brief biography on the web site of Andromeda Studios.

This one opened on June 25, 1965. The opening movie was “The Train” with Burt Lancaster.