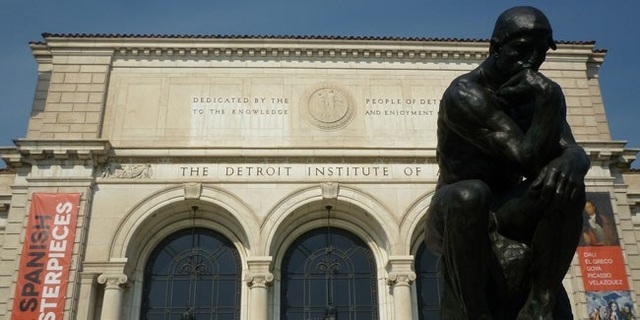 Part of the Detroit Institute of Arts, which opened in 1927, the 1150-seat Film Theatre, designed in elegant Renaissance style, has been screening classic, foreign and independent features for 28 years now.

The auditorium’s original layout was at least in part by C. Howard Crane, though the final design went to Paul Phillipe Cret after Albert Kahn, a trustee at the DIA, turned down an offer to design the theater.

Kahn was ultimately not pleased with several features of Cret’s auditorium, however, once it was completed.

The theater’s color scheme is ivory, gold and red.

Dolby sound was added in 1979, and in 1987, a nearly half million dollar restoration restored some of the theater’s original glory. It underwent another restoration in 2005.

A cafe operates today on the balcony level, in the Crystal Gallery, before and after the feature.

It appears that the renovation is completed.