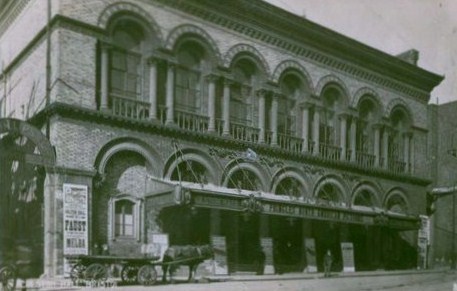 The Colston Hall was opened on 20th September 1867. It was named after Edward Colston who was a Conservative Member of Parliament, a philanthropist and a slave trader. On 1st September 1898 a fire broke out at the adjacent Clark’s clothing factory, which spread to, and destroyed the Colston Hall.

It was rebuilt and re-opened in 1901. Although the purpose use was for a concert hall, the Colston Hall became a venue for early film shows by Ralph Pringle’s North American Animated Picture Company, and in October 1901 by the Thomas-Edison Picture Show which stayed for a six weeks run. Later films screened at Colston Hall include the silent versions of “Romeo and Juliet”, “Samson”, “A Tale of Two Cities” and “Life of Christ”.

In 1935, Colston Hall was closed for remodelling, and it re-opened in December 1936. It was again destroyed by a fire in 1945, caused by a discarded cigarette. It was eventually rebuilt and was re-opened in 1951. The Beatles made their debut here on 15th March 1963, and appeared again on 10th November 1964. Others were to follow; The Rolling Stones, Elton John, David Bowie, Lou Reed & Bob Dylan filmed concert scenes for his film “Hearts of Fire” in the hall. It continues today as a popular concert hall, hosting top musicians, bands and artists from around the world.

Following protests in 2020 by the Black Lives Matter group, the slave trader’s name on the hall was replaced on 23rd September 2020, and it is now known as the Bristol Beacon.