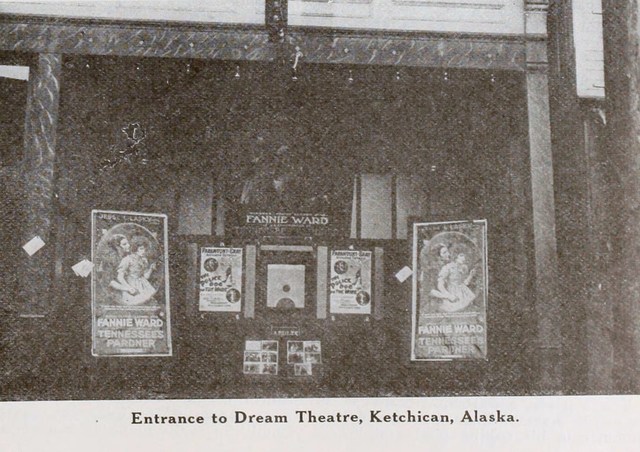 The Dream Theatre was opened prior to 1918 when it was renamed Liberty Theatre. It operated until at least 1935.

The December 14, 1918, issue of The Moving Picture World had an article about Alaska’s movie theaters. It said that Ketchikan then had two theaters: the 225-seat Grand, operated by A. D. Bosworth, and, about one block away, the 330-seat Liberty, operated by Jack Barbour.

The Liberty had recently been renamed, having been the called Dream Theatre by its previous owner, L. H. Kubley, who had operated it for about five years. The Dream had been Ketchikan’s first movie house. Barbour had remodeled the Dream inside and out, and had expanded the house from its former 280 seats.

Kubley planned to open a new theater in Ketchikan, but the article gave no details about that project. This article about the Kubley family says that, in the late 1920s, Lawrence Kubley held a contest to rename his Dream Theatre and the winning name was Revilla. That Dream Theatre must have been the new house that the article said Kubley was intending to build.

This page at the British Columbia Movie Theatres web site says that in December, 1929, the Liberty Theatre in Ketchikan was the first house in Alasaka to be wired for Photophone sound pictures. It had been beaten to the punch as Ketchikan’s first theater with sound by the rival Coliseum Theatre, which had been equipped for Vitaphone and Movietone pictures in June, 1929.