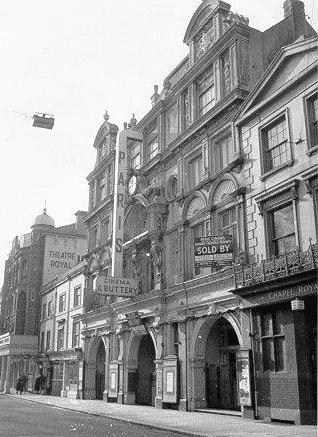 Located to the right of Brighton’s famous Theatre Royal. The Brighton Empire Theatre of Varieties was built on the site of Wrights Music Hall, last known as the Oxford Music Hall. It was opened on 22nd August 1892, and was designed in a flamboyant Louis XV style. Seating was provided in orchestra stalls, dress circle and gallery with four private boxes along the side-walls at dress circle level. The proscenium was 29 feet wide. The opening bill was headed by Vesta Victoria, famous as the singer of the songs ‘Daddy Wouldn’t Buy Me A Bow-Wow’ and ‘Waiting at the Church’. All the top names of music hall appeared here, including Little Tich, George Robey, Dan Leno and Harry Randall.

In 1907, the Empire Theatre was taken over by Thomas Barrasford who also owned the Brighton Hippodrome Theatre, and he re-named it Coliseum Theatre. In 1909, it was converted into the Court Picture Palace.

The Court Picture Palace operated successfully until 1946, when it was taken over by the near adjacent Theatre Royal, and following alterations to the stage by Wembley based architects Morgan & Crook it re-opened in 1947 as a live theatre, known as the Dolphin Theatre. In 1952, it was re-named Her Majesty’s Theatre.

A block of offices known as Norwich Union House was built on the site.