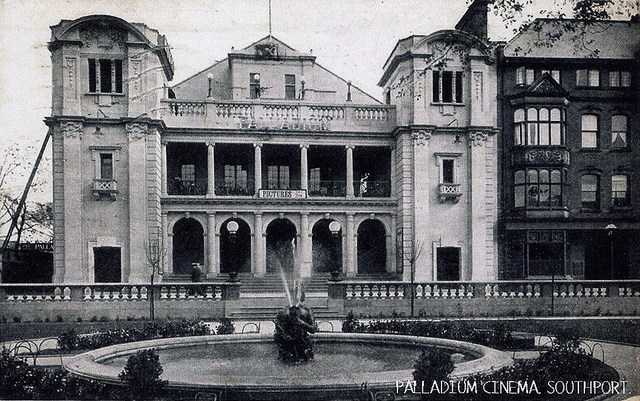 The Palladium Cinema was opened on 3rd January 1914 with “The Death Stone of India”. Designed in an Italian Renaissance style by architect George E. Tonge, the interior was decorated in an Adam style. It had seating provided in stalls and circle levels. It was equipped with and American made Aeolian organ, which had its pipes exposed and on view each side of the 37 feet wide proscenium. There was a 30 feet deep stage, as the cinema was designed for cine-variety use. There was a cafe for the convenience of its patrons, located on the circle foyer level.

On 20th October 1925, the Palladium Cinema suffered a serious fire in the circle area of the auditorium. Architectural firm Gray & Evans were commissioned to restore the cinema.

It re-opened as the New Palladium Cinema on 3rd April 1926 with Virgina Valli in “Seige”. In 1928, it was taken over by Sir Walter Gibbons and became part of the General Theatres Corporation, a subsidiary of the Gaumont British Theatres chain.

Disaster struck again on 26th March 1929, when the auditorium was destroyed by a fire. Only the frontage and cafe part of the building remained.

Gaumont British Theatres brought in their architect W.E. Trent to design a new auditorium, retaining the original facade and front of house areas. This opened as the New Palladium Cinema on 1st October 1930. Later becoming the Gaumont, then Odeon, and now demolished for a Sainsbury’s supermarket, it has its own separate listing here on Cinema Treasures.