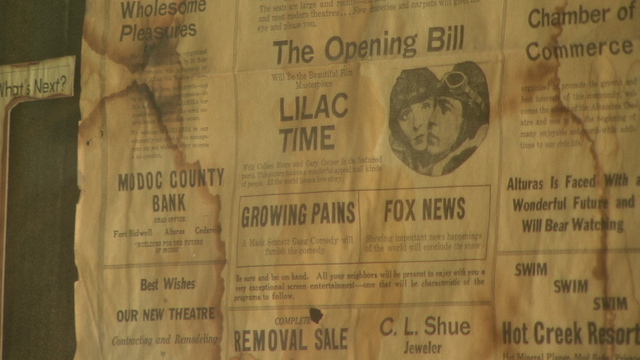 The building was built in 1897 as the Opera House. It was the first Opera House in town and became a silent movie theater in 1914, having been renamed Orpheum Theatre. On January 6, 1922 it was renamed Frolic Theatre. A Grand Opening happened June 2, 1929 after alterations had been carried out it was renamed Alhambra Theatre. The film that night was the talkie “Lilac Time” starring Gary Cooper. The Alhambra Theatre had other uses after the Niles Theater opened in 1937, including the Elks Lodge and Roller Rink.

It was used as a theatre again in the 1950’s. Since 1986, it has been Frank’s Carpet & Furniture. The building has been renovated since then. The owners, Jim & Debbie Rollins, have kept the original stenciled ceiling and there is a display in the entryway of the Alhambra Theatre’s past.