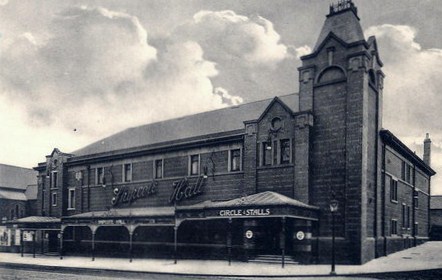 Located in the Low Fell district to the south of Gateshead, Tyne & Wear at the corner of Durham Road & Dryden Road. The Shipcote Hall was opened as a purpose-built cinema on 10th December 1911 and was designed by architectural firm of Hope & Tasker, who were based in Newcastle upon Tyne. Seating was provided on a stadium plan, with a raised stepped section at the rear, rather than a conventional overhanging balcony. In August 1921, it was equipped with a Blackett and Howden 2Manual, 22 stops organ.

Alterations were carried out in late-1933 to the plans of architectural firm Marshall & Tweedy. Seating was now provided for 890 in the stalls and 386 in the balcony.

The Shipcote Hall was closed on 16th April 1960 with James Mason in “Journey to the Centre of the Earth”. It became a furniture store for Hardy’s. In 1975, it became an annex for Gateshead Technical College.