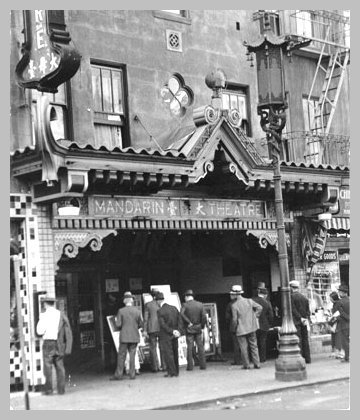 Built as the Mandarin Theatre in 1925, in the heart of San Francisco’s Chinatown, it was initially used to stage Chinese opera. Later renamed the Sun Sing Theatre in 1949.

It closed as a movie house in 1986, and has since been converted into retail use, as the Sun Sing Center.

Its exterior and interior were used for a sequence in the 1948 Orson Welles film, “The Lady From Shanghai”.

Since the Mandarin is now used for retail, its status should probably be “Closed” rather than “Open.”

I remember this theater when I was a kid. My uncle owned a newspaper stand and the owners of this theater used to let him sell newspaper out in front. I remember as a kid my uncle said no going in there and bothering anyone, even if the owners ask you to. We were always to sit out front and read our books or help stack and sort newspaper and magazines. Sad to see what happened to it. It was a part of chinatown history.

Having recently seen what remains of the interior of the auditorium – the proscenium, balcony, and projection booth remain intact and in remarkably good condition – I wonder if the Mandarin was originally built as a legit playhouse used for Chinese opera and the like?

jordanlage…..I just purchased a book, Gold Mountain Big City published this year, about Ken Cathcart, a 1930’s-60’s mapmaker/photographer/chronicler of Chinatown history whose 1947 illustrated map of Chinatown this fascinating book details. The Mandarin Theatre is included on Cathcart’s map and the author of the book (Jim Schein) includes a couple of photos and an already uploaded postcard in Photos. The text for the Mandarin reads in part, “It was a traditional Chinese theatre employing live actors, depicting traditional stories and operatic tales with elaborate costumes and sets. The 1920’s and 30’s constituted the golden age of Chinese opera in the United States, with female performers leading the charge (as opposed to the male dominated opera theaters in China at the time).