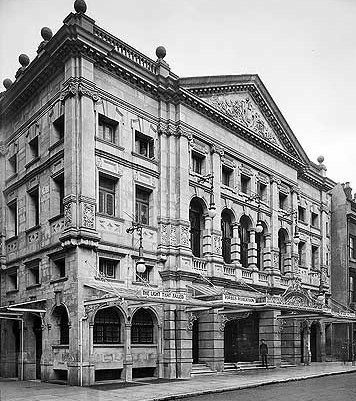 Located in the West End at the heart of London’s ‘Theatreland’. The New Theatre was built by Sir Charles Wyndham at the rear of his Wyndham’s Theatre on Charing Cross Road. The frontage on Saint Martin’s Lane is in a Classical style. The New Theatre was designed by noted theatre architect W.G.R. Sprague and opened on 12th March 1903 with a revival of the play “Rosemary”. It had a seating capacity for 958 in orchestra stalls, dress circle and balcony levels. The decorative style of the auditorium is in a Louis XVI style, with Claude Ponsonby as artistic adviser on the decoration of the theatre. Medallions on the side walls contain painted portraits of French Kings & Queens.

In 1907-1908, the New Theatre presented a season of films. “Peter Pan” was produced here each Christmas from 1915 until 1919. In July 1920, Noel Coward starred in his first produced play “I’ll Leave It to You”. From March 1924, Sybil Thorndick starred in George Bernard Shaw’s “Saint Joan” which ran for 244 performances. John Gielgud became involved with the New Theatre from February 1933 until 1936. During this time he teamed up with Laurence Olivier.

The New Theatre has always been a successful playhouse, and in 1966 premiered Lional Barts new musical “Oliver” which had a long run.

It was re-named Albery Theatre on 1st January 1973, when Ian Albery took over the management of the theatre. Later it became part of the Ambassador Theatre Group. In the 1980’s Willy Russell’s musical “Blood Brothers” premiered here (it later transferred to the Phoenix Theatre where it still plays in 2012).

The Albery Theatre was re-named Noel Coward Theatre in October 2006 during the run of the musical “Avenue Q”, and is now operated by Delfont/Mackintosh Theatres.

The Noel Coward Theatre is a Grade II Listed building.

Two views of the Noel Coward:–

Just south of the Noel Coward Theatre there is a wide alley which connects Saint Martin’s Lane with Charing Cross Road. Halfway down the alley, on the south side, there was in the 1980s a wonderful old quaint shop which sold second-hand books and other memorabilia pertaining to theaters and to cinemas, as well as Film and Stage. I think that the pleasant man who ran it was named “David”, not sure of that. At that time, the stage door at the Albery also served Wyndham’s Theatre. There was a covered footbridge which connected the rear stage wall of the Albery with the rear stage wall of Wyndham’s about 15 feet above ground level. Anyone who had business at the stage end of Wyndham’s could only access it via the Albery.

Ron, The theatre memorabilia shop ‘Pleasures of Past Times’ is still open at 11 Cecil Court, the next alley down from the Noel Coward Theatre, not the adjacent alley. David Drummond is still in charge.

An update to my previous comment: ‘Pleasures of Past Times’ memorabilia shop has since closed.