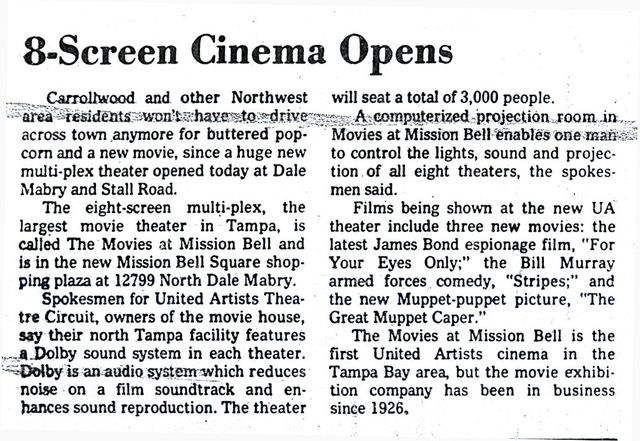 United Artists Theatres opened their UA The Movies at Mission on June 26, 1981. The new complex was located in the recently completed Mission Bell Shopping Plaza. The plaza was anchored by a K-Mart and several other stores along the strip plaza. The theatre sat on the left end of the strip facing Dale Mabry Highway. It was UA’s first and only theatre in Tampa.

The opening day attractions were: “Stripes” “For Your Eyes Only” “Great Muppet Caper” “Swiss Family Robinson” “Ordinary People” “Raiders of the Lost Ark”

The complex contained eight theatres consisting of two large, five medium-sized, and one small auditorium. Each theatre was equipped with Dolby stereo and one large theatre was equipped for 70mm projection. The theatre interiors were decorated nicely enough with designs on the side walls although there was no drapery or curtains to hide the bare screens.

Prior to showtime and during intermission an attempt was made to hide the screen somewhat and entertain the audience as well. An unusual light show consisting of weird and colorful psychedelic-like designs that slowly changed and evolved was projected on the screen. Somewhat interesting to watch but only for a short time as it tended to become very repetitious.

The theatres thrived for several years and were especially popular on Tuesdays when all seats were priced at $1.00 (including new attractions.) Regardless of the film playing, each theatre was packed for the evening shows. The studios eventually got wind of the policy and issued a warning to theatre management to discontinue the policy of $1.00 Tuesdays. Theatre management placed an advertisement in Tuesday’s movie listings stating that it was not their decision to cancel the policy but was in fact due to complaints received from the studios.

Sometime around the mid-to-late 1990’s Mission Bell Square Theatre ran “Lawrence of Arabia” in 70mm. As far as I can tell this was the only 70mm film to play here.

The final day of operation was Thursday, October 14, 1999. The final features shown were: “Double Jeopardy” “Jakob the Liar” “Mumford” “For Love of the Game” “Blue Streak” “Adventures of Elmo in Grouchland” “Stigmata” “Runaway Bride”

Within the next five years many stores began closing and deserting the shopping center. K-Mart was the final store remaining, and when they finally closed their doors in 2005 the entire center was razed shortly afterwards. Today a Lowe’s Home Improvement store sits on the K-Mart site, and a new strip of stores sits on the site of the former Mission Bell Square Theatre.

I loved this theater back in the day and I miss it. I had a lot of fun there.

This theater was the “hot spot” back in the day, mid-80’s when I was in high school! It was THE place to see and be seen and everyone cruised around the parking lot over and over. Back when gas was 80 cents a gallon! Ahh! I remember I saw a film here in 1985 and the ac was broken! I was sad when I came back to Tampa and it was torn down!

It was a nice theatre, really liked it. I remember watching “the Phantom”, “the Arrival”, and a re-release of “the Empire Strikes BacK”. gOOD TIMES :)

Update: last week my son wanted to go to a video game store in Tampa. We live in Spring Hill now but drove down in the pouring rain. Guess where it was? Sight of the old Mission Bell! I wanted to Cry when I saw an Asian joint and video game store where “The Bell” once stood!

I came down from NYC to visit my family in Tampa in December 1982 for the holidays and it was my first time to this theatre and I saw Airplane 2-the Sequel.

Show Biz Pizza family entertainment place was right next door to this theatre. Great way to go have dinner, play games, get prizes, enjoy Pizza and then a movie night!

I worked as an usher at Mission Bell in 1990 during my Senior year of high school. I remember Orin, the theatre’s manager saying they were getting a film in about “1001 Arabian Nights”. He was referring to Lawrence of Arabia. I saw many, many films at this theatre in the 80s.

Remember the soothing light projection on screen through slowly merging globs of oil that would accompany every screening? I’m trying to find a name for that process. There was nothing else like it around.

The Showbiz Pizza Place that was sitting next door operated until September 1986 when it was sold during an absolute auction.

“The Phantom” was presented at the UA Mission Bell Theatre beginning on Friday June 7, 1996 (the film’s US nationwide release date).