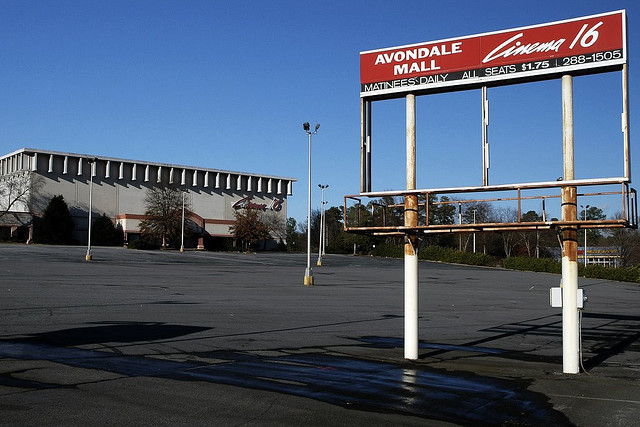 The Avondale Mall Cinema 16 opened on July 8, 1994. It closed in 2000, sits in an almost abandoned shopping mall in Decatur, GA. The the cat walk-like marquee and theater chain name have been stripped off. It is located down a hill and across the street from the Belvadere Theatre.

Yep, 3 years and it was a decent 16 plex, but a bad “hood” coupled with a bankrupt operator (O'Neil). They also owner the NE Plaza 16 that lasted a bit longer.

Photos are located at

This theater and surrounding mall have been demolished and the Wal-Mart is already open. I did go to Northeast Plaza several times but never attended this theater.

Avondale Mall, formerly Columbia Mall was never much of a mall. Although it had a Davidsons and a Sears, there was not much between the two stores.

One interesting tidbit about Columbia Mall was Chuck Norris filmed a scene of his movie Invasion U.S.A. at this mall.

Macy’s was shuttered in 1995, with the Cinema 16 multiplex installed on its second level in 1997. The mall continued to founder, nonetheless. The motion picture venue was shuttered in 2000.

It takes a bad"hood" to close Malls.Same thing happened at REGENCY MALL in Augusta.Woman got raped,one teenage girl was kidnapped found her out in woods with a shotgun blast to the face,yep it closed and so did a Triple theatre in the mall and an eight plex out in the parking lot.

No one including the normally developer-friendly county government wanted the Walmart, esp. after they opened a new store not far away, off I-20. The area to the North and East underwent significant gentrification in the 90s & 00s and the general area around the mall has been ripe for redevelopment.