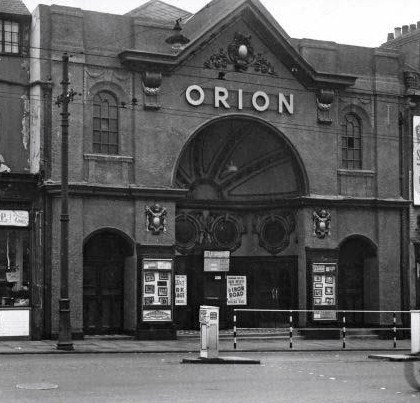 Located in Nottingham’s north-east inner city district of Radford. The Electra House was opened on 15th May 1913 by the Shapeero circuit. Seating was provided in stalls and circle levels. In May 1919, it was sold to the Leno’s Picturedrome Co.

In March 1928 it was taken over by Denman Midland Cinemas, a subsidiary of the Gaumont British Theatres chain and re-named Electra Cinema. In 1930 it was equipped with a British Acoustic sound system. By 1936 it had been leased out to an independent operator, and the Electra Cinema was closed for redecoration in January 1942.

It re-opened as the Orion Cinema on 16th February 1942 with Spencer Tracey in “Men of Boys Town”. The Orion Cinema was closed on 18th April 1959 with David Brian in “No Place to Hide” and Preston Foster in “Destination 60,000”. The building had been leased out by the Rank Organisation.

It was later demolished and shops were built on the site.

A picture of the Orion soon after closing can be seen here.