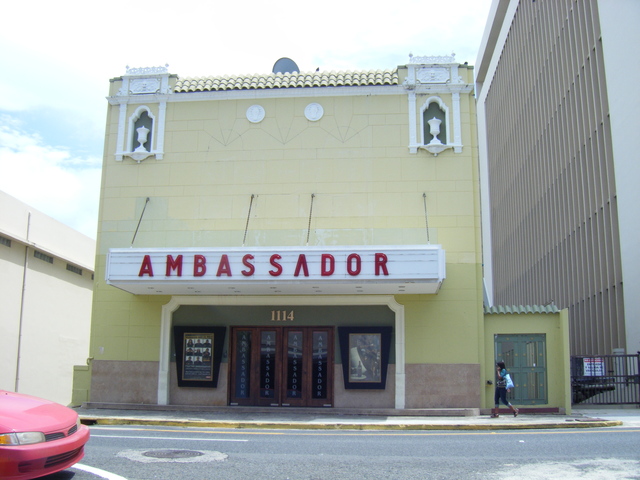 Built during the 1940’s the 500-seat Teatro Venus specialized in B-movies. During its early years, it was the place where kids went to see "Abbott and Costello" movies.

During the 1960’s and 1970’s it changed to exploitation fare and was re-named Teatro Ambassador. It was the place to see women in prison films, AIP and Hammer horror flicks and even the infamous "Ilsa" movies.

For a teenager growing up in the 1970’s, the Teatro Ambassador was the place to see the "R" rated movies they wouldn’t allow us to see in other theaters.

Ocassionally the Teatro Ambassador would show more mainstream movies, but this was not generally the case.

The Teatro Ambassador closed down in the early-1980’s and it became a venue for local theater plays. But this only lasted a couple of years and the theater finally closed down for good.

During the late-1980’s, the marquee was blown away by Hurricane Hugo. Today, the Teatro Ambassador has been renovated by the government in the hopes of restoring a “theatre row” along Avenida Juan Ponce de Leon. You can see the ticket stand, and the candy counter is still there along with memories of many wonderful Saturday afternoons. Seating is now provided for 200 in the orchestra and 75 in the balcony.

It’s on Ponce De Leon Avenue near the Autoridad de Energia building…close to where the old Santurce Woolworth’s used to be. Owner Luis Vigoreaux recently gave a press conference in which he showed the renovated Ambassador theater to the local news media.
In that conference he unveiled an old photo of the Ambassador theater when it was still called “The Venus”.

The Ambassador is open once again as a live theater venue.

The Ambassador actually holds 500 people, 300 in its first level and another 200 in the second level. “Â¿QuiÃ©n matÃ³ a HÃ©ctor Lavoe?” (Who killed Hector Lavoe?), a play about the assasination of the legendary Puerto Rican Salsero, will be the first to play in the newly restored Ambassador.

I was in San Juan in October and saw the Ambassador from the outside and it looked great. The marquee was announcimg the salsa star Gilberto Santa Rosa. Has anyone of the above contributors been inside? In the earlyit 60’s Cobian/Commonwealth renpvated it and opened as the “New” Ambassador with a George Chakiris movie == The Empire of the Sun or something like that == with I believe, Yul Brynner and Christopher Plummer co-starring. Happy New Year, Andres.

I saw Benji, Carrie, Freaky Friday at this theatre. I have such beautiful memories of it and the times spent there. That was when life felt like it could go on FOREVER!

Does anyone have any old pictures of the ambassador?