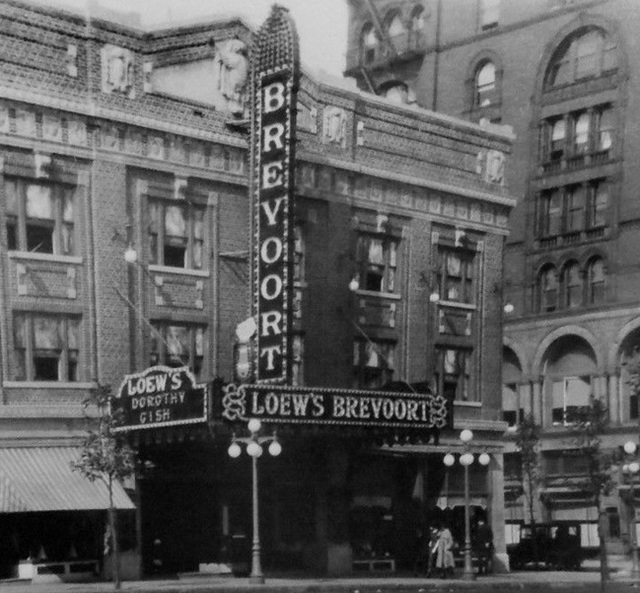 Opened as the Brevoort Theatre on May 1, 1918 with “Mine Own United States”. It was operated by A.H. Schwartz & C. Minor. Seating was provided for 1,432 in the orchestra and 627 in the balcony. The Brevoort Theatre was equipped with a Moller 3 manual 16 rank organ. The theatre was sold to Loew’s Inc. in November 1919.

I now believe that I may have erred on this one. The theater I talk about is actually the Lincoln. The Breevort was located further north on Bedford Avenue, not far from the Bedford. The Breevort might have also been a theater showing Negro movies.

The Loew’s Brevort Theatre is located at 1272 Bedford Ave. and it seated 2036 people.

The correct spelling is BREVOORT, named for the nearby street.

I grew up on Brevoort Place. The Loew’s Brevoort Theater stood on the corner of Brevoort Place and Bedford Avenue,with its main entrance on Bedford Ave, In the early 1960,s it began to rival the Apollo Theater in Harlem by showcasing some of the greatest Rhythm & Blues acts in the history of music on the weekends: Sam Cooke, James Brown, Jackie Wilson, Otis Redding, Smokey Robinson & The Miracles, The Four Tops, The Temptations, Marvin Gaye, Stevie Wonder, The Supremes, Same & Dave, Dionne Warwick, Gladys Knight & the Pips, Pattie LaBelle & the Bluebells, The Manhattans, and so many more. The theater was demolished in the early 1970,s.

I believe Schwartz had some sort of special connection with Loew’s as they seemed to trade theaters more than what would seem normal. See Vogue, Avalon, Prospect(twice) and perhaps others. Perhaps Warren could comment on this ?

This was a great movies use go there with my cousins when I would visit my grandmother. I don’t know what’s there now, but I’ll find out from someone who still live in the area.