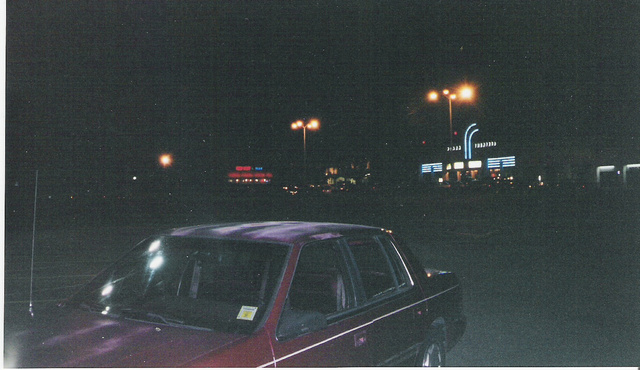 The Plaza Theatres 1 & 2 opened on October 16, 1970 as Chapel Hill’s first-ever twin theatres. Located in the Kroger Plaza Shopping Center at the corner of S. Elliott Road and E. Franklin Street that was owned and operated under Eastern Federal Corporation. At the time of it’s opening the premiere attractions for the grand opening of the Plaza Theatres 1 & 2 were the Triangle engagement of “Patton” starring George C. Scott and “Monte Walsh” starring Lee Marvin. By 1973,a third auditorium was added to its expansion to screen 70mm presentations and later on a Dolby Stereo System was added for its bigger features.

Two more screens were added in the mid-1990’s when the second auditorium and its third auditorium were split into two sections, creating shoebox auditoriums with smaller screens. By the late-1990’s, auditorium one was split down the middle as well creating two shoebox size auditoriums. It closed in 2003, and was demolished in mid-2004 to make way for construction of a new ten screen by the same name which would feature stadium seating and digital sound, something the old Plaza was not equipped for, that was to be operated under Eastern Federal.

The proposed ten-plex for this site fell through when Regal bought out Eastern Federal which lead to other factors that made Regal Cinemas not to build the proposed theater. The lot where the Village Plaza Theatres once stood is now vacant.

FYI – Dolby Stereo was installed in third auditorium prior to 1978 “Grease” release, rather than “Empire Strikes Back” although the latter used the same auditorium/system a year or so later.

Dolby’s install records from the summer 1978 period (when “Grease” opened) make no reference to this theater, suggesting the install took place during a later timeframe, the records are incorrect, or a Dolby-compatible competitor format system was what was installed.

That’s right. The system was actually in place in time for the premier of “Alien” in Spring ‘79.

FYI-A Dolby Stereo System was installed in the cinema’s third auditorium in the Spring of 1978 prior to the opening of “Grease” which played here in Dolby Stereo during the summer of 1978. “Close Encounters of the Third Kind” played here in the fall of 1978 as a re-release issue in Dolby. The system was already in place for the Triangle showing of “Alien” which played here on June 22,1979 in Dolby Stereo. It was already up and running in time for the Triangle showing of “The Empire Strikes Back” on June 20,1980 in Dolby Stereo. Also to point out it did show a lot of films with Dolby Stereo presentations…among them “Indiana Jones and the Temple of Doom”, “Purple Rain”, “The Goonies”, “Extreme Prejudice”, “Indiana Jones and the Last Crusade”.

Foggy memory here. I originally thought it was spring of 1978 – I was actually involved in the install but could not remember the exact date(s). I was pretty sure the installation happened before Grease.

raysson’s latest comment contradicts my comment from January 2nd. Per his request, I recently sent him some information pertaining to early Dolby installations in North Carolina, but, unfortunately, it would appear he has misinterpreted that info. What I had mentioned to him in regard to this theater was that Dolby’s records suggest a timeframe of no earlier than December 1978 and no later than July 1980 as when this theater first had installed a Dolby cinema processor. If, however, he insists a Dolby unit was in place in time for “Grease” (June 1978), well, let him prove it!

(raysson: How is “Dolby” handled in the Chapel Hill newspaper ads for “Grease”? Is there explicit text indicating a Dolby presentation and/or new sound system installtion? If it’s merely the Dolby logo embedded into the ad, then I hardly think that qualifies as an indicator this theater ran “Grease” in Dolby Stereo.)

The Dolby system was indeed installed prior to the release of Grease in 1978. As I stated earlier, I was personally involved in the installation, overseen by William Shearer, company engineer from Atlanta. We tested the system – holy cow it was nice and sounded great for Grease. The only proof I have is first hand experience and at least one other guy involved in the installation. No big deal really. I managed this theater for a time – trained there as well during which time the install took place – early 1978 without a doubt.

William Shearer, well, that is a name from the past. Eastern Federal had a big presence in Atlanta by 1971 and he was in charge of their subsidiary, American Theater Supply. All booth and concession supplies, except the prepopped popcorn was ordered from there. At least for the Atlanta area theaters, I don’t know about out of town locations. Mr. Shearer also did the company’s booth repair and maintenance as well as supply all booth equipment, from carbons, to splicers, to reel to reel tapes of intermission music.

When I started working for EFC in 1971, ATS operated out of the basement of the downtown Coronet Theater, an area that also contained the theater bathrooms and the office of the City Manager, a fellow by the name of George Shepp. The Coronet was EFC’s flagship and a very busy theater. In the Spring of 1972 the company rented space in a strip of storefronts on Spring Street near Third. Several managers and doormen from different theaters were ordered to report to the Coronet basement and we spent the day moving all of the stock and equipment to the new location.

EFC was out of Atlanta by 1979 but I do not know about ATS. It was centrally located among the remaining EFC locations in the SE, so maybe it stayed. It’s old home on Spring Street remained in use as a very popular nightclub until a couple of years ago but has now been demolished as Georgia Tech continues to expand down Spring Street all the way to The Varsity.

Just like so many of the theaters it served, the time for ATS is over and it’s home is now in the landfill.

All supplies mentioned by Mr. Malone to theaters in the Carolinas came through the ATS Charlotte NC location.