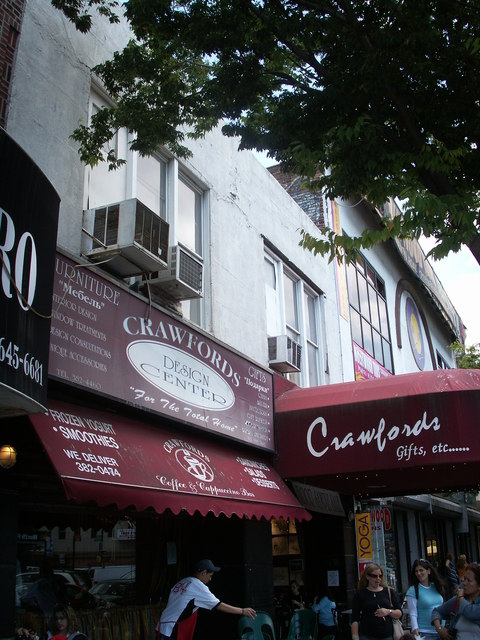 A small theatre. Considered the poorest of the movie theatres on Kings Highway between Ocean Parkway and Nostrand Avenue. The Triangle Theatre was opened by Century Circuit Theatres on October 2, 1936 with Katharine Hepburn in “Mary of Scotland” & Jane Withers in “Pepper”. It had first run movies, but competed with the Kingsway Theatre and Avalon Theatre, which were only three blocks away in either direction. By 1950 it was operated by Liggett-Florin Booking Service.

Contrary to what has been written, the Triangle has NOT been demolished. It has merely been converted into a furniture store. The marquis is still in existence and if you walk into the store, the main furniture display area was the theatre.

This theater had a strange configuration. it was small and there was no balcony. There was a prominent staircase leading up but it led only to the restrooms and the projection booth. After you proceeded into the theater past the ticket taker, you had to turn left. The theater was constructed on a right angle. The rear wall, behind the screen backed on east 12th Street. That wall is still very visible.

The history itself is quite interesting.
I agree with Orlando. The Triangle had to be named for the Sgt. Joyce Kilmer Square that is situated just opposite the old theater entrance. The Triangle was a great place to catch up with a film before it disappeared from the circuit.
Look for Sgt. Joyce Kilmer Square on this site:
View link
(It can be seen right after Crazy Eddie.)Itâ€™s where Kings Highway meets Quentin Rd.
By the way Quentin Rd. was originally Ave.Q. It became Quentin Road to honor Teddy Rooseveltâ€™s youngest son who was killed in WWI. Look for that also on the site.

Amen! I spent many a Saturday matinee there during WW2 years. There was NO BALCONY!
Karl B.

Spent so many Saturday afternoons there from late 40’s to mid 50’s. Every Saturday was a kid’s day, where on line, they would hand out promotion cards, and if you had the right color card, you would get in free. You would get 10 color cartoons, 2 movies (usually a western or an A&C movie, or war movie) and a Pathe news. We always sat in the kids section on the left, and would throw popcorn at the matron, who just passed and who always had her white hair in a bun, and a backside like a table. We were rotten kids, and there were about 12 of us from E. 13th between Kings Highway and Ave. Saw “The Thing” with James Arness there, and didn’t sleep for a week.

OMG, during the 70s and 80s I hung out in this neighborhood a lot, and had no clue that the furniture store had been a theater!

On April 22, 1919, the NYC Board of Appeals reversed a decision by the superintendent of buildings and allowed H. G. Wiseman to apply for a permit to build a theater on the northeast corner of Avenue Q and E. 12th Street in Brooklyn, which is the Triangle’s location. Architect Wiseman was applying on behalf of the owner of the proposed theater, James P. Kelly.

Assuming that the project was carried out in 1919, presumably Carlson & Wiseman designed the theater. Although an earlier comment by Warren G. Harris says that the Triangle was opened by the Century circuit in 1936, Google Street View shows that the side of the building along 12th Street, which has not been remodeled like the Quentin Road facade, is built with a type of brickwork characteristic of the 1920s and earlier, not the 1930s or 1940s.

It’s possible that the theater was built in 1919 and operated for a while, but was closed for some time before being reopened by Century in 1936. If someone has access to Brooklyn directories from the early 1920s they might find the house listed, perhaps under a different name, and probably with an Avenue Q address.

I have uploaded two photos of the theater, circa 1940, from the NYC Tax Photo collection, 1939-41. They’re not great photos, bu it’s nice to see something from the past, whether we’re old enough to remember it or not. The address is listed as 1205 Quentin Road, in the 1940 Brooklyn phone directory.

I was walking by yesterday and the ‘marquee’ caught my attention. There is now a clothing store, Clothes Horse.