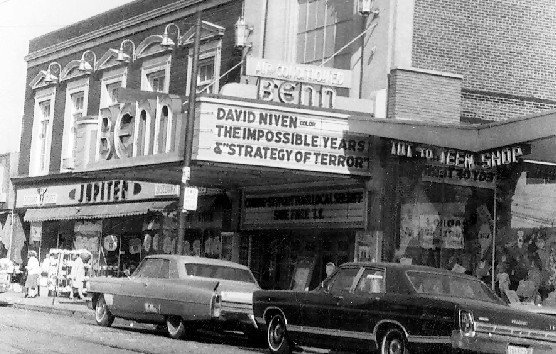 Named after its operator Marcus Benn (who also operated the Bell/Benson Theatre a few doors along the block). The Benn Theatre has a narrow presence on Woodland Avenue, with the auditorium at the rear on Saybrook Avenue. It opened on September 1, 1923 with Thomas Meighan in “Homeward Bound”. It was equipped with a Kimball 3 manual 14 ranks organ. In 1924 the Kimball organ was replaced by a United States organ. The Benn Theatre was later renovated in 1929 to the plans of architectural firm Hodgens & Hill. By 1930 it was operated by Stanley-Warner Theatres By 1941 it was operated by Warner Bros. Circuit Management Corp. and later by RKO Stanley-Warner. It was closed on February 6, 1977 with Brad Crandall in “In Search of Noah’s Ark”.

It went over to retail use, but the building stands vacant and deteriorating in August 2019.

Also in the photo section.

I would love to chat with needb. I grew up in Southwest Philadelphia and the Benn was my escape into a world of animation and wonder. If needb could help, I would love to find out if a record was kept of all the movies played at the Benn. There is a film as I saw as I child that absolutely captivated me and left me in complete awe. If I can find the title of that film, I would be overjoyed.

I remember many kiddie double feature matinees at the old Benn. Standard format was a film, some cartoons, then a second film. When it was over, I would go to the payphone in the storage closet (the dial had a “Z” at “Operator”) to call my parents to pick me up. Then, the Benn was threadbare but clean. The upstairs bathrooms had a strange corridor arrangement that had me wordering if it had a balcony at one time. If it did it was renovated over long before my day.

What I remember is when one of the double features was in scope they kept the masking open even for the film that was flat. If both films were flat the masking was closed.

In my early days as a projectionist, I worked in some older theatres that we did the same thing. It was because the theatres did not install masking motors so the projectionist could operate it from the booth.

My parents and I went to SW Philly to see Charles Bronson in Hard Times in 1975. The Benn featured a double feature that evening: 11 Harrowhouse and, of course, Hard Times. The Benn had a long lobby in which you walked diagonally left before entering the auditorium which runs parallel to Woodland Avenue. Later, as we were walking out with the crowd, my Dad said to me that this is Bronson’s best film. As it turned out, he was correct. Coburn, Martin and Bronson were terrific in that film set in New Orleans . The opening at the old sugar plant is so moving. The Benn was a bit tarnished but still beautiful. It was and RKO Stanley Warner house for a while. The nearby Benson Theater was a Radio Shack at that time.

As of December 2021 the building is for sale. The realtor has posted images which show the auditorium in an advanced state of decay. The are also images which suggest that part of the building was used as a church. Perhaps that was the old “Benn Dance Studio”? [https://www.foxroach.com/ListingDetails/6322-WOODLAND-AVE-PHILADELPHIA-PA-19142/PAPH101273]

The only thing that was in there for years after they closed was John’s Bargain Store than a beauty supply.

The Benn Theatre closed permanently on February 6, 1977 with “In Search of Noah’s Ark.”