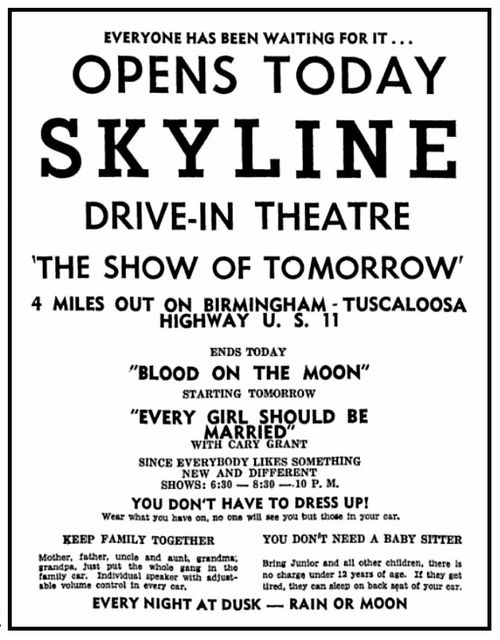 The Skyline Drive-In opened on March 12, 1949, featuring “Blood on the Moon” with Robert Mitchum, Barbara Bel Geddes and Robert Preston. It was opened by H. J. Cleveland Sr. from Tuscaloosa and Tom Jones who was from Decatur, GA. It was advertised as being the only drive-in with a completely paved parking ramp in Tuscaloosa, with a 300 car capacity. In the 1950’s, they featured contests and stage shows. The stage shows varied in nature from musical acts, Hollywood stars and even Kirma, a noted Psychologist. He made the drive-in theatre circuit performing his stage act.

In 1964, the Skyline Drive-In was leased for ten years with three, five year options to R. Cobb of Cobb Theaters. Mr. Cobb also owns and operates the Dale Drive-in Theatre. On July 16, 1970, the management got arrested for showing X-rated movies to underage minors. On August 5, 1970, the Cobb Theater chain discontinued showing X-rated movies in all of their theatres in Tuscaloosa. These theatres included the Dale Drive-In, Tide I, Tide II and the Druid theatres. In October of 1970 the Skyline Drive-In was closed for good. The property was sold and redeveloped for retail and was renamed The Skyline Plaza.