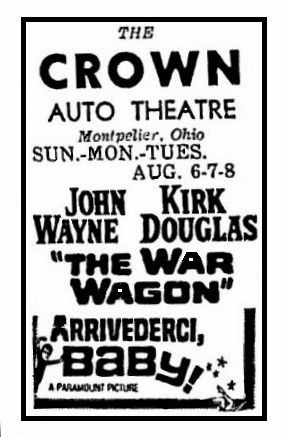 The O.M.I. Auto Theatre opened up on July 15, 1956, featuring “Vera Cruz” with Gary Cooper and Burt Lancaster. O.M.I is the acronym for “Ohio”,” Michigan”, and “Indiana”. The auto theatre was opened by Howard W. Sharpley with a 300 car capacity. The concession stand was leased out to Ohio Drive-In Caterers Inc. to provide refreshments for the customers. It had 64 ft. x 40 foot screen tower with two Century projectors. These projectors had Super Simplex projector heads and Strong lamp houses.

In 1960, O.M.I Theatre Corp. was formed by Bruce Kidson. The auto theatre was purchased from Howard W. Sharpley. The theatre featured playground equipment and pony rides for the kids. In February 1964, O.M.I Theater Corporation leased the theater with all the equipment to Clarence A. Roberts, Kay Sonja Gautsch and Lawrence W. Gautsche.

On April 23, 1964, the theatre was renamed the Crown Auto Theatre for the start of the summer movie season. The Crown Auto Theatre closed at the end of the season in 1967. In November of 1970, Martin Sprocket and Gear from Arlington, TX, bought the property from Stateline Investors (Bruce Kidson) for construction of a new factory.