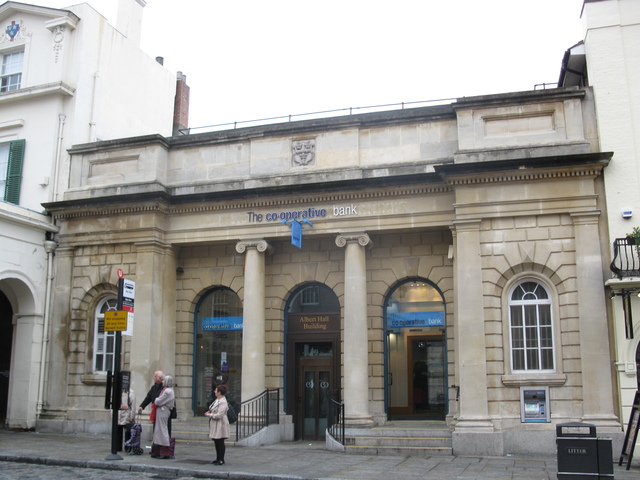 Located in Colchester, Essex. The Corn Exchange was built in 1844, and opened in April 1845. It screened its first films in 1908, but over the years it was used as a technical school, an art gallery and a repertory theatre. In the early-1930’s it was converted into the Corn Exchange Cinema. It operated as a cinema until 1946.

Owned by Colchester Council, it was re-named Albert Hall and was used by the Colchester Repertory Company until 1972.

It was purchased by the Co-Operative bank and was converted into one of their bank branches.

There is additional information about the theatre here.

This venue was never used for roller skating. Roller skating was in the ‘newer’ Corn Exchange (built in the late 19th C) further along the High Street, near to the Town Hall. As the link in the previous comment notes, as ‘The Albert Hall’ this building housed the Colchester Repertory Company which put on a play every week until the new Colchester theatre opened in 1972. I went to many theatre performances there as a child and teenager in the 1950s and 1960s.

Maizie, if you have any memories about the old Rep, I would be delighted to hear them. There is more info on my blog http://colchesteruncovered.wordpress.com/2014/06/29/colchester-repertory-theatre-a-history/ You can contact me on