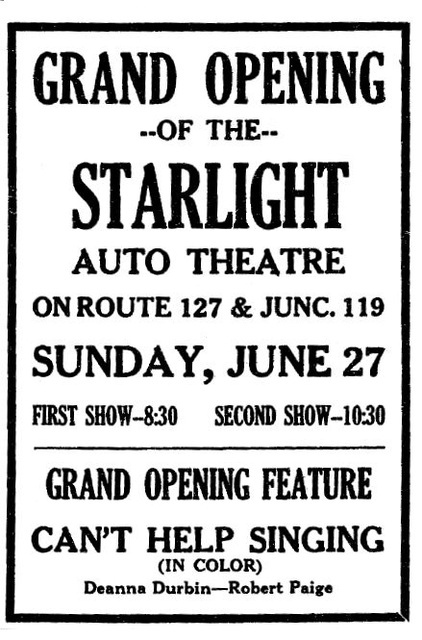 The Starlight Auto Theatre opened on June 27, 1948, featuring “Can’t Help Singing” with Deanna Durbin and Robert Paige. The Starlight Auto Theatre was built and operated by the Feltz brothers from Cassella, Ohio. The auto theatre has a capacity of 300 cars with each having individual car speakers. It has a 50 feet high X 46 feet wide screen tower. Eventually it was converted to an AM/FM sound system.

After having various owners over the years, the Starlight Auto Theatre was sold to Joanne Myers and her son Dan in 1987. Joanne started working at the auto theatre in 1968. The Starlight Auto Theatre is open between the months of April and September. The theatre featured two first run movies Friday, Saturday, Sunday and Wednesdays when school is out. Admission prices are $4.00 for adults while kids 12 and under are free.

A picture of the theater’s signage: View link

Thanks CSW. This is nice hometown auto theatre. The only thing it needs is a litte TLC.