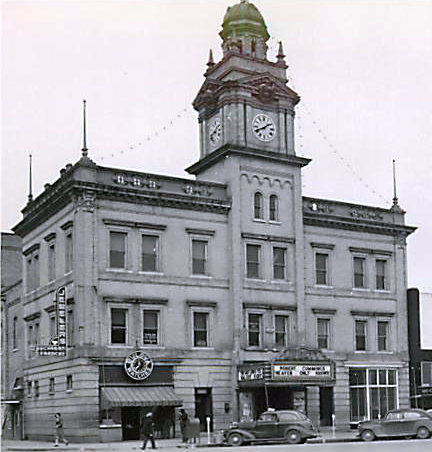 Wilby-Kincey Theatres bought a half-interest in the Liberty Theatre in 1936 and made major changes, advertising “Practically Everything New - Including the Phone Number.” Business improved and by the early-1940’s, holdout crowds were common. In 1948, Sam Irvin bought George Hendrickson’s share of the Liberty Theatre and began construction of the new Darlington Theatre on Pearl Street. The Liberty Theatre seems to have closed by 1965.

This webpage includes pictures of the Liberty Theater.

If one scrolls down to p. 11 on this webpage, a picture of the Opera House before its conversion to the Liberty Theater can be seen. The caption indicates that the building was razed in 1965.

The caption of the photo CSWalczak linked to also says that the architect of the City Hall and Opera House/Liberty Theatre was Frank P. Milburn.

Now a parking lot. Such a waste. An extremely ugly courthouse also replaced a historic structure at the same time.