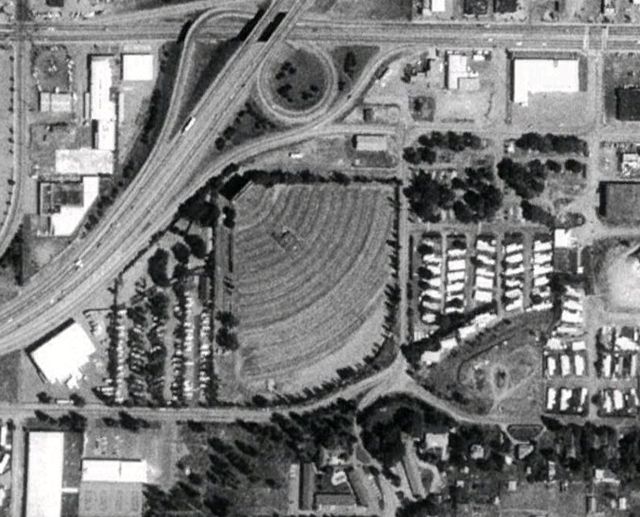 The start of construction of the East Sprague Drive-In was first announced in the Spokane Daily Chronicle on July 26, 1949. Favorite Theatres, who ran three indoor theaters in the city and two in Salt Lake City, Utah, was the builder. However the president of the firm, Joseph Rosenfield, said that this operation was his own personal project.

The 1,000-car theater opened on September 17, 1949 as Spokane’s third drive-in movie. The opening double bill was Esther Williams in “This Time For Keeps” and John Garfield in “Force Of Evil". In 1965 the drive-in was a first in offering in-car heaters so the theater was able to stay open year-round.

From 1972 to 1986 the drive-in was listed under SRO Theaters until Cineplex Odeon bought SRO in December of 1986 and when it opened in the spring it was charging $5.00 a carload. There was still another change when Act III Theatres bought Cineplex Odeon’s Spokane theatres in 1992.

The East Sprague Drive-In’s advertisements disappeared from the theater listings in September of 1993 and the Daily Chronicle said it was being closed to make room for a freeway interchange. Today part of the former site of the drive-in is occupied by a self-storage facility and its restored sign is on display at the Spokane Valley Heritage Museum.

There are some pictures of this theater’s signage on its gallery page at Drive-ins.com.

I checked both addresses and they both point to the location of the DI. Maybe, before the I-90 interchange was built, the East Sprague address was the correct original address.

Opening day article lists address as the E6200 block of Sprague. Same article reports J.J. Rosenfield built at a reported cost of $100,000, it sported a 60 foot tall screen tower and a 50 foot wide screen, and was then managed by Robert Coleman for the Favorite Theaters chain. Uploading opening day ad. https://news.google.com/newspapers?nid=1338&dat=19490916&id=rzsaAAAAIBAJ&sjid=JicEAAAAIBAJ&pg=6114,165691&hl=en

Also opened with a technicolour colour(not named). Closed in 1993. The self storage facility is called Self Storage of Spokane.