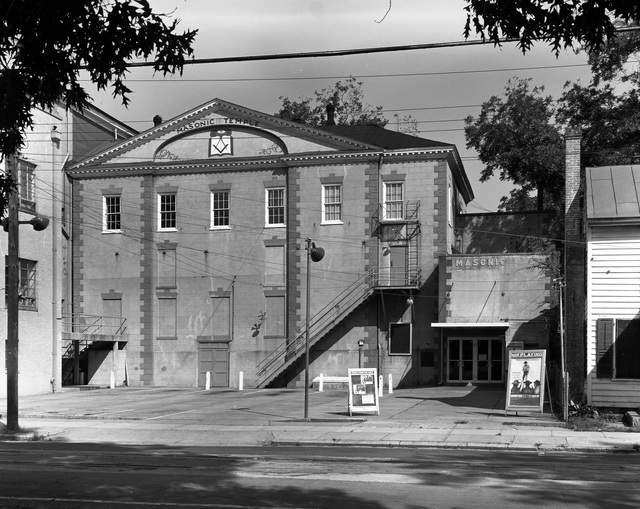 Originally a legitimate house, movies were being shown here by 1910. The Masonic Theatre would be New Bern’s leading downtown movie theater for decades; the Athens Theatre (originally a vaudeville house) was its primary competitor. The advent of television and drive-in theatres hurt business, but it was the arrival of shopping-center cinemas that finally forced the Masonic Theatre to close in 1974. The Southgate Cinema 1 & 2 opened around the same time as the Masonic Theatre closed.

Status of the Masonic Theatre should be open. It is once again a legitimate theater (its original purpose), home of the RiverTowne Players. The Masonic Theatre began showing movies in 1917 (not 1910) and continued as a movie house until 1974. The correct address is 514 Hancock Street.

Another competitor during the downtown movie house days would have been the Colonial Theater where the Branch’s Office Supply & Furniture is currently located at 309 Pollock Street.

Here is an item from the November 3, 1917, issue of The Moving Picture World telling of the conversion of the Masonic Theatre into a moving picture house:

“NEW BERN, N. C. — For the first time in many years there is to be opposition in the motion picture field in New Bern, one of the best show towns in the state, but which has remained under control of Messrs. Lovick and Taylor for a long time. While the public has not been informed of the fact, plans have been drawn and the deal is closed by which F. W. Hahn, a picture man of experience, will, after alterations, open the Masonic theater, and will conduct it exclusively as a high class motion picture theater. It is expected that the new theater will open about November 1 or probably a week earlier if alterations can be completed in time.

“The Masonic theater, formerly playing road attractions exclusively, with its large seating capacity will furnish the people of New Bern one of the most comfortable theaters in the state. Modern equipment from booth to screen will be installed by Mr. Hahn, and every effort will be made to give the picture patrons of New Bern the best service possible. Henry Randall, of the Famous Players Exchange, Washington, closed the first contract for the new theater, putting in the entire output of the Paramount-Artcraft group to begin November 1.”The houses operated by Lovick and Taylor mentioned in the article were the Athens and the Star.

The Athens was eventually purchased by a Mr. Keyhoe, who changed the name to the Keyhoe. It was later sold to S&E, who renamed it the Tryon, which it remained until the New Bern Civic theater reverted to the original Athens.

This is the first I’ve heard of a “Star” theater in New Bern, very interesting.

Also, there was a theater in Bayboro, NC that doesn’t appear on the CT list. It eventually was turned into a bowling alley, and at one time, and later a seafood restaurant. I think the buildig is still there.

As well, there was a theater in Vanceboro, NC. I think that building might still be there as well.

The Vanceboro indoor theatre , located on the corner of Main Street and White Street, was torn down around 1978-79 after being used as a Laundromat in the 1960s through the early 1970s. Only the lower portion of the wall along White Street remains. Vanceboro also had a drive-in theater just north of town on the corner of NC 43 and Bailey Lane, demolished by 1970.