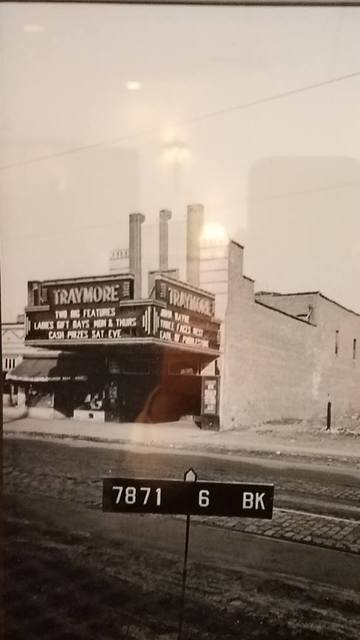 The Traymore Theater stood on East 46th Street and Avenue N in East Flatbush. It opened in 1934 and was operated by Brandt Theatres. It was closed in 1951.

Today, the front section of the building has been rebuilt, and a funeral business operates from the building.

The Traymore and the Quentin were small houses in the Century Circuit not far from the Marine Theater back in the 1940’s. Century built the “new” Brook theater around corner from the Marine which was located on Flatbush Avenue on Flatlands Ave. When the Brook opened in 1949 both other theaters which were in easy walking distance closed. The Brook and Patio were then booked with double features which had played the Loew’s better neighborhood houses and the Century Kingsway.

Century’s Marine and Avalon played the double featured bill playing the better RKO neighborhood houses concurrently. In the early 30’s Avalon had been a Loew’s house but went dark and was taken over by Century. It kept its distribution slot in the scheme at that time showing Loew’s programming after the Metropolitan and Kings until double features came into vogue for the majors.

When the Avalon first opened it was known as Loew’s Piccadilly before Century took over operations along with the nearby Loew’s Manor which later on became the Vogue. If Century ran the Kent in the late ‘40’s which I see as 1947 or later, they had it less than a year. I’ll have to scan the Brooklyn Eagle for that year and check up on it.

The theatre did open as the Piccadilly as the ads in the Brooklyn Eagle show the name along with the other Loew’s theatres in their directory ad. Go to the library and look it up and then add your corrected comments Warren.

Interested in knowing if the building that housed the Traymore still stands—like the Quentin?

The exterior theatre auditorium walls are still standing behind the newly built McManus Funeral Home frontage. The front storefronts and the theatre’s lobby were demolished so no evidence of a theatre is seen from Ave. N. If you go around the corner you will see the theatre’s walls and exits (now used for admitting the deceased prior to viewing). I spoke to a gentlemen in McManus and he said none of the theatre’s auditorium interior survives, but one never knows. This was a Brandt theatre. Opened in 1934 and closed in 1951, just about the time of the Quentin’s demise.

Was inside the building yesterday, and unless there’s something hidden above all of that drop-ceiling, the theater has long been removed from the building.