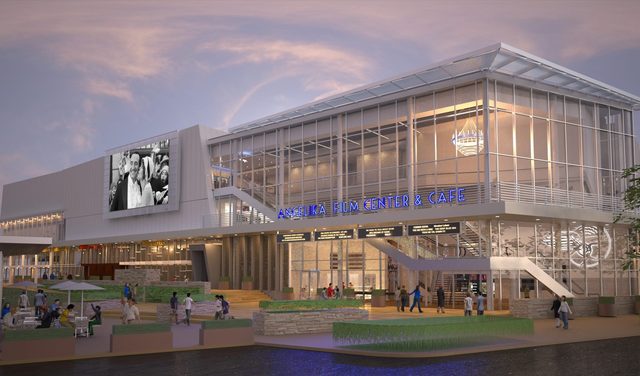 Located in what is now known as the Mosaic District and built on the site of the former Lee Highway Drive-In and Lee Highway Multiplex Cinemas. The Angelika Film Center & Cafe at Mosaic opened in September 2012 as part of the Mosaic District mixed use facility which includes shopping and restaurants. The Angelika Film Center & Cafe at Mosaic is equipped with 35mm and digital projection. The progam policy is to screen art films independent and classic movies. As well as a cafe there is a separate bar.

tix are available for a 3D presentation of Hitchcock’s ‘Dial M for Murder’ – thumbs up!

the 3D systems are Dolby systems – the glasses are thicker and heavier than what I am accustomed to, but the image and 3D pop of ‘Dial M for Murder’ was really really good.

a mini Spielberg retrospect is happening this month Friday and Saturday late night with digital DCP’s of Jaws, Indiana Jones and the Last Crusade, E.T … and Close Encounters (director’s cut ) in 35mm (!!! awesome!)

Giles, when you say horizontal masking do you mean that the masking moves horizontally (i.e. side masking) or that the masking itself is horizontal relative to the screen and moves vertically (top masking)? I live outside of Richmond but love and envy the D.C. film scene, and am thinking of checking out the Angelika this weekend. But I hate screens with top masking and avoid them at all cost.

on a side note: the 2015 opening of the downtown Washington DC complex has this bit of new news regarding a ‘Pop-Up’ location opening in mid June:

“DC’s acclaimed Union Market and Reading International, Inc. (NASDAQ: RDI) have announced that the Angelika Pop-Up, a three screen micro cinema located in the growing Union Market district, will open on June 13, 2014. The Angelika Pop-Up will serve as the DC hub of Angelika’s signature mix of specialty film programming and unique events during the development of the permanent Angelika Film Center expected to open in late 2015 at Union Market.

As announced in late 2013, Reading International signed a lease for an Angelika Film Center in Union Market. This new multi-screen cinema will combine the most cutting edge presentation technology with elements of luxury and comfort in stylish surroundings reflective of the creative spirit existing at the Market, an artisanal, curated year-round food market featuring over 40 local vendors. While this new state-of-the-art Angelika Film Center is scheduled to open at Union Market in late 2015, the Angelika Pop-Up will satisfy a growing demand for unique entertainment to complement the Market’s vast culinary offerings.

“The vibrancy and creativity of Union Market make it a perfect home for the Angelika Pop-Up,” says Ellen Cotter, chief operating officer of the US Cinema division of Reading. “And we are honored that our state-of-the-art Angelika, in development now, will be part of the continued re-shaping and transforming of this important area of Washington, DC.”

“Our vision for Union Market is to create a place that brings together the innovative and creative community of DC,” says Jodie McLean, President and Chief Investment Officer of EDENS, developer of Union Market. “The caliber of the Angelika’s programming and their overall commitment to emerging and established filmmakers from both here and abroad makes them the ideal partner for Union Market and the surrounding DC neighborhood.”

For the Pop-Up, a raw warehouse space was converted into three intimate screening rooms. This will offer an immediate venue for the culturally-rich DC community to enjoy not only a range of independent, foreign and specialty films, but also specially tailored film-based events, panels and unique alternative content. By providing opportunities to connect with the films and each other, the Angelika Pop-Up at Union Market aims to support a creative community of local, national and international filmmakers, artists, and film enthusiasts.

In addition to the familiar theater concessions of popcorn and soda, a menu featuring a selection of packaged snack foods and drinks of the gourmet quality Union Market guests are accustomed to will be curated by former Food Network executive Bruce Seidel (Hot Lemon Productions) and former Food Network chef Santos Loo. Among the special items that guests can enjoy before, during or after their film are: Rosemary Truffle Popcorn, Crunchy Kale Chips, Maple Bacon Chuao Chocolate Bars, Intelligentsia Coffee, and a selection of craft bottled beers and wines. While this temporary micro cinema will not offer all the luxurious amenities of the future state-of-the-art cinema, the Angelika Pop-Up will feature pristine new Barco digital projection and digital sound as it offers a sneak-peek of the provocative and intelligent programming the neighborhood deserves. The Pop-Up will operate seven days per week, with showtimes and advanced reserved seating"

here’s the online story and what is opening:

In his directorial debut, Mike Myers documents the astounding career of Shep Gordon, the consummate Hollywood insider. Beginning with a chance encounter with Janis Joplin and Jimi Hendrix in 1968, Gordon managed the careers of Alice Cooper, Blondie, Luther Vandross and Raquel Welch. He even found time to invent the “Celebrity Chef” with his representation of Emeril Lagasse and forge a friendship with the Dalai Lama through his philanthropic endeavors with the Tibet Fund. Stuffed with fantastic archive footage, Gordon’s unlikely story is told by Alice Cooper, Michael Douglas, Sylvester Stallone, Anne Murray, Willie Nelson, Emeril Lagasse, and more.

Patrice Chereau’s acclaimed tale of intrigue and forbidden love returns to theaters in its complete, uncut version in celebration of the landmark film’s 20th Anniversary. Triumphant winner of 5 Cesar Awards and the 1994 Cannes Film Festival Jury Prize, this powerful and sexually charged film stars Isabelle Adjani, Daniel Auteuil, Virna Lisi and Vincent Pérez. Amidst the late 16th century Wars of Religion, when Catholics and Protestant Huguenots battled over control of France, scheming power player Catherine de Medici offers up her daughter Margot for marriage to the King of Navarre in a bold political move to reconcile France.

This inspiring documentary explores the hopes and realities of the under-acknowledged and totally unfunded group of Brooklyn artists behind the urban dance movement known as “flexing.” Born in the Brooklyn neighborhood of East New York, the competitive dance style combines dramatic contortions, simulated violence, and flowing footsteps that are at once flights of fancy as well as poetic evocations of the streets. Shot over two years by local filmmakers, the film is structured around Battlefest, the central organizing event of the Flex movement, and focuses on some of the community’s key personalities.

An official selection of the Toronto International Film Festival, Cesar Award winner Martin Provost’s VIOLETTE spans 20 years in the complex life of trailblazing French feminist author Violette Leduc, and her relationship with the legendary Simone de Beauvoir. Born out of wedlock in the early 20th century, Violette (Emmanuelle Devos, in a searing performance) encountered Simone de Beauvoir post-WWII in St-Germain-des-Prés. The intense relationship between the two women would last their entire lives – a relationship based on Violette’s quest for freedom through writing and Simone’s (Sandrine Kiberlain) conviction that she held the fate of an extraordinary writer in her hands.

Sound system is sort of a crapshoot here.

Chef in theater #3 sounded bland, but that had to do with the mix itself.

Snowpiercer in theater #1 was loud and chaotic, but clear.

Guardians of the Galaxy in theater #2 was quieter than Snowpiercer. The theater itself had a noise floor issue, it sounded like the HVAC was pretty audible, and this was throughout the entire film and ruined the quiet moments.

The fourth Angelika outside of New York was designed by veteran art cinema architect Frank Dagdagan. Angelika called this theater more refined though the “bohemian aesthetic” was still present with raw materials, wood floor at the first level, exposed concrete floor at the second level and exposed ceilings. Furniture and artwork still maintain the attitude of Angelika sought in both design and film selection.

I have to give credit to the sound system in auditorium #2 – I saw ‘Jurassic World’ three times in the theater; once in 3D / IMAX-laser – the best in terms of color, black levels and 3D depth, standard 2D / 5.1 sound at Regal Bethesda [the worst presentation] 2D / 7.1 here at the Angelika – and in terms of sound it was actually the best – the 7.1 mix was better than the IMAX-laser presentation by placing a lot of audio cues to the left/right rear center channels to dramatic, scary effect – in one instance a character’s demise is heard directly behind us the viewer to unnerving finesse . Because of the odd aspect ratio of the movie, (2.00:1) the vertical masking (to eliminate the minor black borders above and below the image) was nearly spot on and took up most of the tall screen. My fingers are crossed that maybe auditorium 2 might get upgraded to Atmos, or DTS' new ‘X’ object based sound system, since it seems like a waste of potential with the ceiling speakers already in place… time will tell.