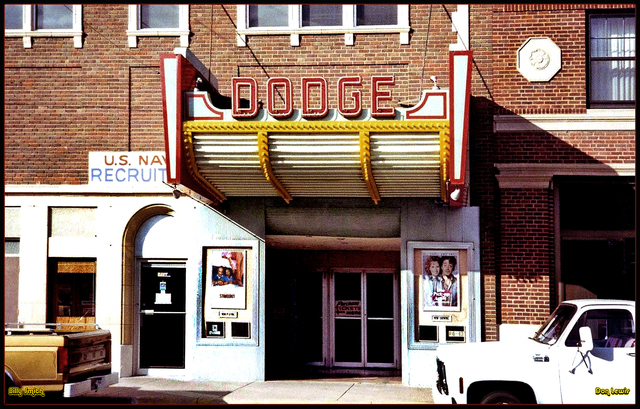 The old Dodge Theatre is an architecturally ornate movie house, complete with a balcony. It opened in 1929 and was once known as the Fox Dodge Theater. The Dodge Theatre’s claim to fame is that it held the premiere of the Errol Flynn movie “Dodge City” in 1939.

Although I didn’t visit it until the early-1980’s when I was 5, I remember thinking that all movie theaters were supposed to have curtains and balconies and chandeliers like the Dodge Theatre.

It closed in the late-1990’s after it had been renovated and reopened a few years prior.

Have you ever imagined what it would be like to own a movie theater?
Undoubtedly, a lot of people fantasized about having their own theater in post-war America, when movies were the primary form of entertainment for a jubliant nation.
As every home got its new-fangled television set, despite poor reception and limited broadcast hours, the writing was on the wall for movies.
The industry responded with blockbusters, giant screens, Dolby sound, multi-plexes and 3-D, but video rentals and now movies delivered directly to your home computer continue to draw business away from theaters.
The movie palaces located in downtown business districts across the country gave way long ago and many were torn down or converted to something else.
Dodge City was lucky in a way â€" the Dodge Theater was not destroyed by modernization. In fact, Mike Burkhart, who has owned the theater since 1987, did significant restoration work in the 1990s and continued to show movies there for a while.
Since closing, the theater has remained unchanged â€" empty but full of memories.
And now, those memories are about to go on sale.
Burkhart will auction the theater off to the highest bidder on June 24 through the Derby-based Real Estate Auction Partners.

Moving shadows
The Dodge Theater opened in the late 1920s.
Among its early patrons was Dennis Hopper, who was born in Dodge City on May 17, 1936, and lived here until his family moved to Kansas City at the end of World War II.
In a January 2001, interview with journalist Elizabeth Snead, Hopper said “I grew up in the Dust Bowl and the first light I saw was in the movie theater. My grandmother really used to fill her apron with eggs; we’d walk a few miles to Dodge City. She’d sell the eggs and we’d buy movie tickets."
Hopper told Snead he’d return to the farm and pretend to be in the world of whatever movie he’d just seen: cowboys and Indians, swashbuckling pirates or soldiers.
Hopper often talked about watching the trains heading west from Dodge City and thinking about going to Hollywood to see the ocean and be in the movies.
When he eventually got to California, he was disappointed at the ocean, claiming it looked just like the fields of wheat he’d grown up with.
Hopper was not alone in his love of movies.
During the Dust Bowl and the Great Depression and World War II, Hollywood kept a steady stream of escapism delivered to local theaters, which often kept a schedule of three different programs every week, complete with double features, cartoons and newsreels.
And Dennis Hopper was not the only movie star to visit the Dodge Theater.
In 1939, Warner Brothers was preparing for the premiere of a new movie starring Errol Flynn and Olivia de Havilland. "Dodge City” was a Western epic in true Hollywood style, and someone in Dodge City got the idea that the premiere should be at the Dodge Theater.
According to local lore, a delegation of Dodge Citians camped out at the Warner Brothers offices, hoping to sell the idea. Warner Brothers had never hosted a movie premiere anywhere other than Hollywood.
Eventually, the studio announced plans for a Dodge City premiere, and the entire state of Kansas got involved.
The studio scheduled a train from Hollywood to Dodge City, full of the stars of the movie and studio executives.
The town planned an arrival ceremony at the depot, along with a parade and a full schedule of luncheons and dinners.
The population of Dodge City was about 8,000 in 1939, but when the train arrived, a crowd of approximately 50,000 gathered at the depot to greet the stars.
A local college girl, home from KU for the premiere, managed to get tickets to a dignitary luncheon in the Rose Room of the Lora-Locke Hotel. After watching Errol Flynn puff on a steady stream of cigarettes during the luncheon, she rushed to the head table and dumped his ashtray into her purse. On her return to KU, she sold puffs on Errol Flynn’s cigarette butts for 25 cents each.
The premiere itself bordered on chaos. Extra security was called in to roust the crowd. Newsreel cameras were stationed atop the theater’s marquee. Everyone hoped to get a glimpse of the stars.
The movie was greeted with enthusiasm by the local crowd but somewhat snubbed by the critics.
1939 was the year of “Gone with the Wind” and “The Wizard of Oz."
Errol Flynn wasn’t nominated for an Academy Award â€” Clark Gable, Laurence Olivier, Mickey Rooney and James Stewart were. And Robert Donat won for “Goodbye, Mr. Chips."
Olivia de Havilland, although nominated for her supporting role in "Gone with the Wind,” did not appear among the Best Actress nominees. That list included Bette Davis, Irene Dunne, Greta Garbo and Greer Garson. Vivien Leigh won for “Gone with the Wind.”

Things change
If the Dodge Theater never saw another evening quite like the world premiere of “Dodge City,” it did see a steady stream of great movies through the 1950s and ‘60s.
But as the moviegoing audience declined, so did the theater’s fortunes. It has remained empty since closing several years ago.
“My roots go deep in Dodge City, so I could appreciate its importance, but it’s time to let it go,” owner Mike Burkhart said in a recent press release from the auction house selling the theater.
“It’s part of my community and has been since 1928, and I’ve loved owning it. But I just reached a point where I couldn’t run it anymore, and it needs someone to start bringing in shows again.â€
Travis Loftis, partner of Real Estate Auction Partners, said: "It’s been well maintained. Mike upgraded the equipment and seating, but he just doesn’t have time for it. It’s too important historically to just sit there."
The theater is approximately 15,000 square feet and currently seats 664 people. The commercial side of the building is included in the sale and includes 20,000 square feet with four storefronts and three stories.
The theater and office space are part of Million Dollar Block, a name given to the development when it opened. They are also part of Dodge City’s historic district.
The Lora-Locke Hotel, which has been renovated to provide offices for Ford County, is also part of the Million Dollar Block.
The building will be sold at a live auction on June 24, but bids are being accepted online now. A Web site at www.reapauction.com has an extensive photo gallery and a link to register for online bidding.
According to the Web site, the building will "sell to the highest bidder regardless of price,” with no minimums or reserves.
The auction will also include any contents on site on the day of sale.
The Web site will also link you to the Turner Classic Movies site, where you can see the original 1939 movie trailer for “Dodge City."
And maybe you should think about it: How often does the chance come along to bid on a true piece of Western and movie history?
Copyright 2010 Dodge City Daily Globe. Some rights reserved

Is being auctioned off right now, this very minute… I hope someone buys it to restore and reopen to the public so everyone can once again enjoy it.

I was at the auction yesterday, there was one bid for $25,000! I think the large majority present were just there to see what it would sell for and expected the selling price to be out of their league (at least I did)! Thus most were unprepared to bid, and were put off by the high property taxes.

how high are the property taxes? and are they past due or years worth?

The Dodge Theatre is the right age and size to be the house mentioned in the December 22, 1928, issue of Motion Picture News:

“Bids have been taken for the construction of a theater and commercial building to be erected in Dodge City, Kansas, by Otto Theis. The building complete will cost $150,000 and the theatre will include a main floor, mezzanine and balcony and will cover a site 125 by 115 feet. Ellis Charles and Co. are the architects.”

Otto Theis was a prominent local rancher and businessman, and would not have operated the theater himself, which would have led to the Fox circuit’s involvement. Architect Ellis Charles was based in Wichita, and is little known outside that city.

Kim Holland begins the dismantling process on the Dodge Theater marquee Tuesday morning. The sign is offered for sale on eBay.

Workers began dismantling the marquee at the Dodge Theater Tuesday.

The sign, which had begun to fall apart, was put up for sale by the building’s owners, including a listing on an eBay auction.

By Tuesday afternoon, only one bid had been made on the eBay site. The bid of $490 does not meet the reserve price set by the owners and would not purchase the sign. The owners explain in the eBay item description that the sign will be taken down piece by piece to salvage the exterior components. Workmen said they will set the pieces in the theater lobby.

The sign’s framework is not included in the sale, as some has deteriorated and failed, which is the reason the sign is being removed. Other parts of the framework may be damaged during removal.

Workers were removing the many light bulbs from the marquee but most of the metal bases were rusted into the sockets. The sign’s original neon tubes were either broken or expected to crumble during removal due to brittleness.

The listing also noted that the entire theater is for sale, but not as part of the eBay auction. In response to an online question, owners declined to palletize and shrink wrap the sign’s pieces for shipping. They offered, however, to meet the buyer, provide the pallets and wrap for free and “work for $10 an hour” to prepare the pieces for shipping. The online auction is set to end just after noon Friday.

The Globe spoke to Dennis Veatch, development services director for the city of Dodge City, who said a letter had been sent to the owners of the Dodge Theater asking them to repair or remove the sign due to life safety concerns.

“We noticed that part of the sign had collapsed and was in danger of falling onto the sidewalk,” Veatch said. Dodge City has a property maintenance ordinance which requires owners to properly maintain their property, especially if it may cause danger to the public. “The lower roof above the sign had collapsed and damaged the sign in the process. It needed to be repaired,” Veatch said.

“I guess we hoped they’d repair it rather than remove it, but it’s not the original marquee so that’s a consideration too,” he said.

(Update: The sign was bought by a group of local citizens. Plans are to raise funds to restore the sign sometime in the future.)

Group is planning to restore the theater if funding can be found.

April 28, 2016: visited the Dodge Theatre. More than three years since the crowd-sourced fundraising effort began, the aged, historic venue continues to fall into disrepair. Recent pictures in the Photo section.