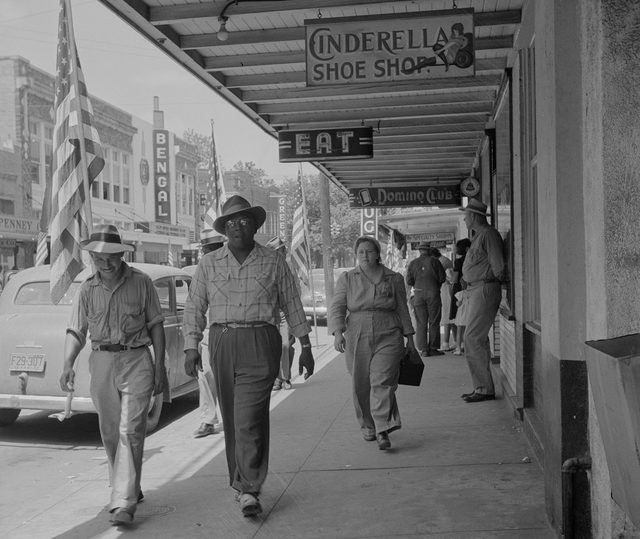 Originally opened as the American Theatre. It was renamed No-Name Theatre on October 31, 1934. Following a naming contest it was renamed New Starland Theatre on December 7, 1934. It was taken over by Jefferson Amusement Co. in 1937 and was remodeled in 1940 to the plans of architect Leon C. Kyburz, reopening as the Bengal Theatre on December 25, 1941. It became part of Paramount Pictures Inc. through their subsidiary Julius Gordon. It was still operating in 1950.

1943 photo added, photo credit John Vachon. Tall man on the right has been identified as Charlie Fairchild by his great granddaughter Deborah Smith. Via the Traces Of Texas Facebook page.

The December 23, 1940, issue of The Orange Leader said that the Bengal Theatre would open on Christmas Day. The Bengal was operated by Julius Gordon’s Jefferson Amusement Company, which also operated the Strand and the Gem. According to a lawsuit in 1952, Jefferson had taken over the house in 1937 when it was called the American Theatre. The remodeling project had been designed by L. C. Kyburz, Jefferson’s in-house architect.

The American Theatre was in the George E. Holland Building and 5th and Main according to the local paper. The former American Theatre became the No Name Theatre relaunching on October 31, 1934 with Rocky Rhodes and Tombstone Canyon. On December 7, 1934, after a contest, the No Name became the New Starland Theatre. The Starland closed in 1937. After being purchased by Jefferson Amusement, the circuit transformed the theatre to the Bengal Theatre relaunching December 25, 1940 with “The Hit Parade of 1941.”