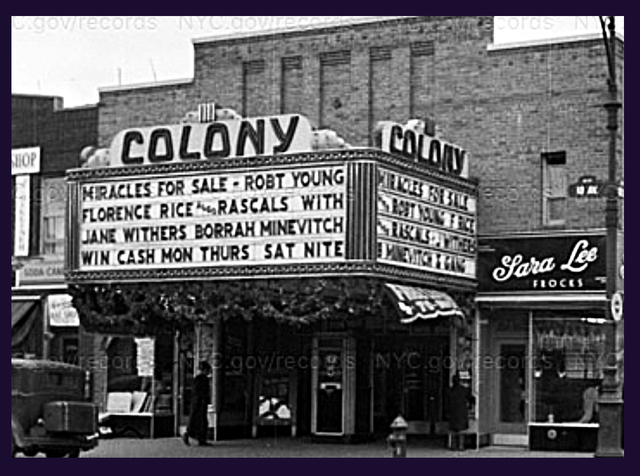 Opened as the Mapleton Theater in 1917, this 500-seat independent house stands at the intersection of 18th Avenue and 65th Street (near the Walker Theater). In 1938 it was enlarged to the plans of architect Eric O. Holmgren and now seated 597. In 1939 it was renamed the Colony Theater.

Since closing in 1952, it has been converted to retail use, currently a Rite Aid store.

The site now might be the home of a Rite Aid drug store, as the address appears to line up with the old movie house’s address.

This was the former Mapleton Theatre.

.Posted for PhilPhil by Theaterat. The Colony was a small very sub par little theater that was only 1block away from the beautiful Walker. This theater was bare bones and did not even have a domed celing, let alone a balcony. There was no seperate entrance from the lobby to the orchestra. I remember 3 blocks of seats seperated by 2 aisles. The seats were very hard and not too comfortable.This theater had a small screen and the last run fare they showed always seemed to end up off the screen,never giving the moviegoer a clear view.The inside was painted a dark brown color. It was not too clean.I never liked to go there. It closed in the early 50s, a victim of TV. This theater( along with the lowly Metro on 20th.av and 64th. st) was called “the Dump”. Posted by Theaterat for PhilPhil.

I attended the colony as a very young child. I do not believe it was demolished. At present the site is a Rite Aid Drug Store. I believe the building the store is in is the Colony’s building

My Mom remembers the “Dump” fondly.