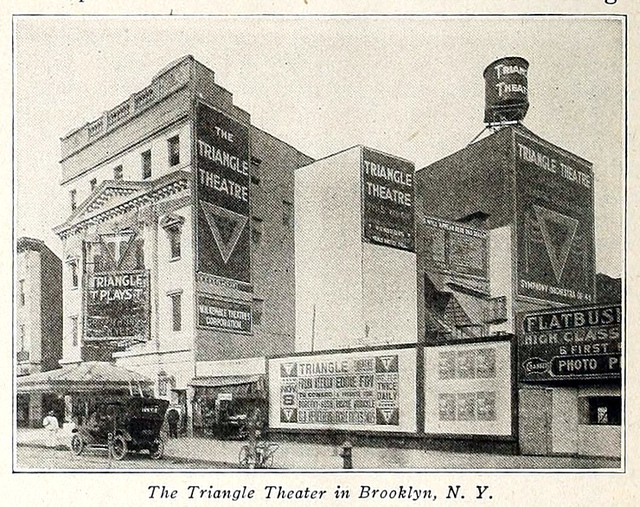 Werba’s Brooklyn Theatre stood at the busy intersection of Flatbush Avenue and Fulton Street. It was razed to make way for an office building.

The last post reminded me that the Marx Brothers would do a similar exercise, even after they were established film stars. But their trial-runs were mini tours deliberately designed to retool material for use in their then upcoming films.
Since they came from a live stage/ Vaudeville revue background, they were at ease testing out jokes to a live audience. Then change up whatever got the bigger laughs there, before the new routines were subsequently used in films.
I seem to remember reading they did this up until Irving Thalberg’s death. After which the fun had gone out of making pictures for at least Groucho according to his book “Why A Duck” I believe. It’s the only autobiography I once read by just him.

Not sure what various theatre’s this practice was done at, by I think they went back to New York from Hollywood to do so. If anyone can connect them to specific New York theatres, maybe they could post it here first.

Correction, it was the “Marx Brother’s Scrapbook”. An extensive late life pictorial history compiled by Groucho. Which I’ll try and find, and help identify the theatres when I can.

Difficult to believe that such an extraordinary theater (judging from the lenghty description in, “Colonel Sinn’s Montauk Theater Souvenir” program) should last what amounts, really, to just a brief period of time.

They were going to tear down the FOX in Atlanta for a office building like New york and Atlanta need another high rise.

Its pretty amazing they could move a theatre like they did back then.

An interesting discussion thread above, which I picked up on when googling ‘Keeney’s Theatre Livingston St. Hanover Place.’ I have a photo of my grandmother and her Vaudeville troop outside a theatre poster, it maybe the theater too, from roughly 1925. It is posted here: View link
Could anyone verify for me whether she’s outside the theatre itself? Comparing with the 1905 snap of it here: http://www.shorpy.com/node/4906?size=_original it wouldn’t appear so. Thanks,Inesita (of interest?: View link)

Many thanks Tinseltoes! I agree, but I guess my grandmother was stood before her own theatre poster ;–) I have continued the line of enquiry regarding Keeney’s in the context of Loew’s Melba Theatre over at: /theaters/4149/ Thanks again and Best wishes, Inesita

Added three photos of the theater being moved. According to one source it was due to be torn down because of the traffic approach for the new Manhattan Bridge. Accordingly, the owners purchased land on Livingston Street at Hanover Place for the New Montauk theater in 1904 and opened the New Montauk on Christmas 1905.

Turns out that the New Montauk never showed movies and does not qualify for CT.