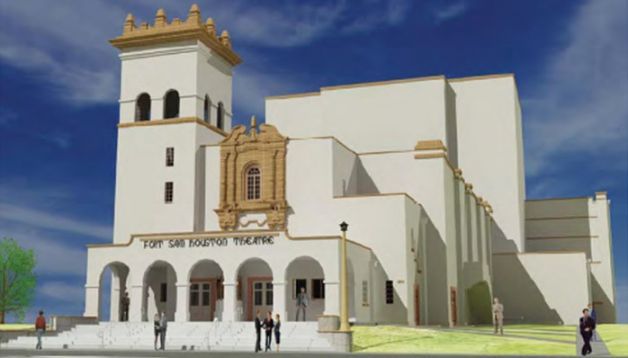 One of the first military theatres in the United States, the 1935 Spanish Colonial Revival 14,700-square-foot Fort Sam Houston Theatre, closed for decades, got a $16.9 million renovation in 2011 by Lampasas-based RKJ Construction Inc. through the Army Corps of Engineers. It’s a candidate for inclusion in the National Register of Historic Places as part of construction ordered by the Defense Base Closure and Realignment Commission. (RKJ Construction is also renovating a group of 1880’s buildings at Fort Sam.)

The work on the theater included restoring interior frescoes and ornate woodwork and tile inside and outside. The theatre also will be a candidate for Leadership in Energy and Environmental Design-Silver certification.

The theatre will be the new home of the military’s Family and Morale, Welfare and Recreation Command’s Army Entertainment Division, which is relocating from Fort Belvoir, Virginia and which stages the U.S Army Soldier Show, a touring musical production that features active-duty soldiers, and the theatre will be its new home and base of operations to train, rehearse, recruit and from here depart to other bases around the world to bring entertainment to the soldiers, with its new 18,000-square-foot addition housing office and storage space, recording studios and a new stage house.

In 1935, the Army wanted similar architectural styles within each region in which it was constructing new buildings, and a well-known San Antonio architect, Atlee B. Ayres, persuaded the government to use the ornate style with deep roots there.

The Army Entertainment site indicates the Fort Sam Houston is the second oldest of the military theaters. Didn’t specify which was the first.