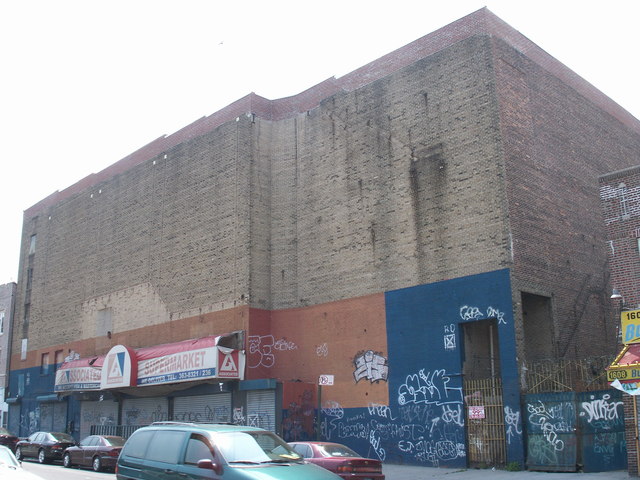 Opened by the Supreme Circuit on September 1, 1927, this huge 2,223-seat house had its ornate entrance on St. John’s Place, but the theatre itself ran down Buffalo Avenue in the East New York section of Brooklyn. It was equipped with a Wurlitzer 3 manual, 10 rank organ. It also had a roof garden theatre which had 1,298 seats. I don’t know much more than Fox Metropolitan Theaters ran it at one time.

The outer lobby became some kind of used furniture store, while the bottom half (orchestra seating area) of the auditorium became a supermarket on Buffalo Avenue. By 2006, both had closed and the theatre sat empty and unused. In 2015 it was gutted and converted into apartments.

We lived at 276 Buffalo Avenue, right around the corner from the Congress, where I saw my first movie, ‘The Three Stooges in Orbit’ with my 10-year older uncle, who sat us in the Loge so he could smoke. My grandmother had been the ticket seller at the Congress in the 1930s and, if I’m not mistaken, my grandfather, an electrician who died in 1930, had been a projectionist there. In the early 1970s when I went to work as an usher in another great old Brooklyn movie house, the Granada at Church and Nostrand Avenues (up from the Bickfords), the owner, Max Schering, and the cashier, Irene, a grandmother-aged woman herself, remembered my grandparents, Max from when he had been an userher and Irene because my grandmother had trained her to be a cashier at the Congress in the 1930s! And just to complete the circle, I recently learned that my grandfather, who I knew had passed out and died one hot day in his car on his way to work, died outside the Grenada!

To Paul Kupperberg….I remember you from the Granada Theatre days and remember Irene, the cashier talking endlessly about how beautiful the Congress was and the marble staircase in the lobby.
She was a great lady and I am glad I had the pleasure of knowing her and all from the Granada Theatre. I finally saw the marble staircase as photographed within the last two years from friends of mine. The Congress still retains a lot of it’s glamour and architecture. Reach me at I go under the name Orlando on Cinema Treasures but you would know me as Lenny.

P.S. How’s your friend Steven who also worked the Granada when you were there.

My then girlfriend Marsha G and I spent nearly every Friday night from August to December 1962 at the Congress.

If you move along the street view to Buffalo Ave, and around to the side of the huge theater building, you can see the remnants of the old entrance to the Associated Supermarket that was there for a while. Apparently, the building is just open to the elements, and you can even see vagrants inside the building going through the open area of what was the supermarket. Click here for this depressing view

Hi, Permits were issued in 2012 and interior of theater was gutted. It you go by today you will see they have added steel beams inside shell of building. It looks like they are adding four floors of space above orchestra level. I also went up to the old roof open air theater. It had a separate stair way in the inside that went up to it. When I gained access I went from supper market back storage area. There was a ladder that went up 10 feet to top of store ceiling. There were sheets of plywood on top of supports for ceiling that went to left box seat. You entered box seat and then hallways. Lobby of theater had a car repair shop in it. Stairs were bricked up. The store manager said it was safe but I had doubts. JOHN D.

Building seems to continue to have work done to the upper floors. Roof is completely gone and insulating material has been attached to some areas so whatever this will be it will be at least four stories high. Thinking maybe conversion to apartments.

I added a new photo to the gallery, this one from the 1939-41 NYC Tax Photo collection.

The Congress theatre opened on September 1st, 1927 per 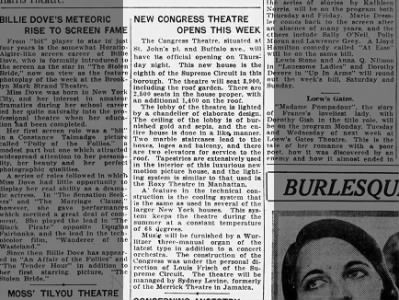