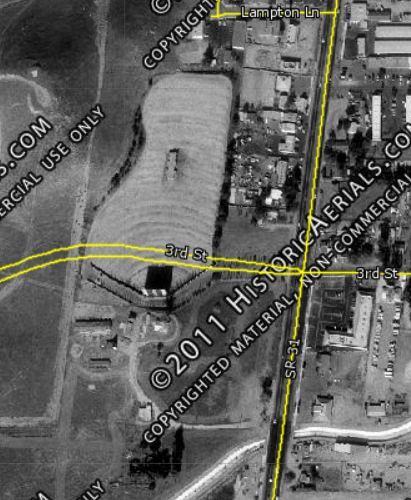 The 1,000-car Crest Drive-In, managed by SWP Associates, a group of independent investors, opened on December 20, 1968 with “The Sound Of Music". The Corona Daily Independent said it was “Set in a natural amphitheatre encircled by eucalyptus, palm and cypress tree". The report said that it was one of the first theaters in Southern California to install Xenon, the latest equipment for projection.

In the early-1970’s it was listed in the Daily Independent as a National General Theatre and then dropped out of the Mann Theatre listings in the Los Angeles Times in December of 1977. It appears it became an independent after that because it doesn’t show up in any of the chain theater advertisements.

On June 27, 1985 the Crest Drive-In turned up again in the Times. The report said that two men described as in their early-20’s held up the ticket booth at the Crest Drive-In Theater on the west side of Hamner Avenue, taking more than $200 and the attendant’s car, a 1977 Datsun worth $1,500.

The Crest Drive-In was listed in the International Motion Picture Almanac through 1988 as independently operated by R. Cornwell.

The Drive-ins.com website has an entry for a Crest Drive-in at 2600 Hammer Ave., but locates it in Norco, CA, which is very close to Corona. There is one picture of the theater’s signage there.

I was thinking it was in Norco and that’s where I looked first. I remember viewing triple features of the Clint Eastwood “Man with no name” films there.

It was taken out by the extension of 3rd Street. Opened 1968, closed 1976. The housing just west of this intersection is where the theater stood. 3rd Street from Hamner to the housing complex was the entrance road.

A 1980 aerial photo from NETR Online shows the drive-in still intact. The extension to 3rd Street was not put in until later. Plus, the property today is a shopping mall with several businesses. The area itself still retains the overall unique shape of the drive-in.