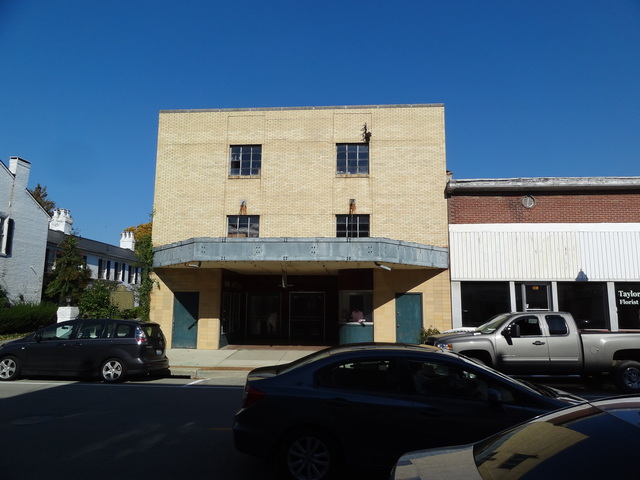 The Valley Theater was opened in 1947.

A list of houses operated by AIA Theatres in the 1950 Theatre Catalog includes this: “VALLEY, Taylorsville, Ky. (1946).” A 1948 mention in Motion Picture Herald refers to it as the “…new Valley Theatre at Taylorsville….” The rather plain facade definitely looks like a 1940s design.

Funny you should mention the plain facade. When I was photographing it, I was thinking that somewhere in Kentucky someone must have had a monopoly on that yellow brick for theaters. Seems like I see it an awful lot.

So, I’m watching an episode of American Pickers. It takes place somewhere in KY. I think it’s episode 22. The guy has a slot machine but I keep seeing a sign on the wall in his place that says Valley Theatre.

The March 6, 1948, issue of Boxoffice said that Morris Smith and Clark Bennett’s new Valley Theatre in Taylorsville, Kentucky, which was virtually completed, had been partially flooded by recent high waters, but the damage being slight the event was not expected to interfere with the contemplated opening date of the house.