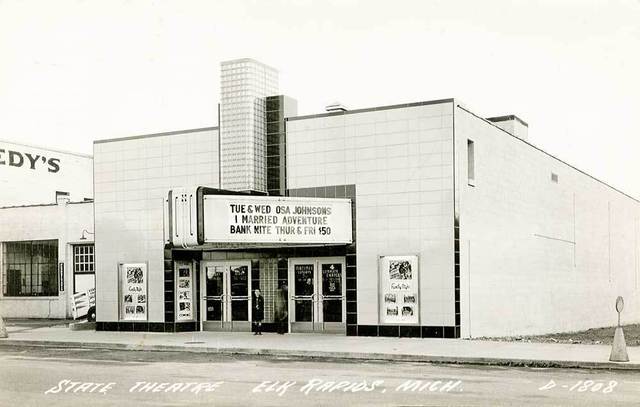 I just sent some interior shots of this theatre to waterwinterwonderland.
Once they are posted, feel free to post them here with credit. Thanks

First known as the State:
http://tinyurl.com/2fkumz

The Traverse City Record-Eagle reported the sale of the State in June 1960. The sellers were Mr. and Mrs. Harold Loomis. The new owner, Harold Coddington, expressed an interest in showing foreign films along with the regular first run features.

The State Theatre was built in 1940 as a replacement for the Community Theatre. The February 22, 1941, issue of Boxoffice featured three photos of the State Theatre. An unusual feature of the design was the use of black light throughout the auditorium, including carpeting that fluoresced.

The May 8, 1961, issue of Boxoffice reported that new owner Howard Coddington was changing the name of the State Theatre to the Cinema. It was called the Cinema Theatre in various issues of Boxoffice as late as 1973. The first time it is referred to as the Elk Rapids Cinema was in 1974, after it was purchased by Joe Yuchasz.

The article Tinseltoes linked to gives the exact opening date of the Elk Rapids Theatre as September 20, 1940, and also notes that the house was designed by Stewart-Kingscott Company. One of the partners was Louis C. Kingscott. I’ve been unable to find Stewart’s first name or initials.