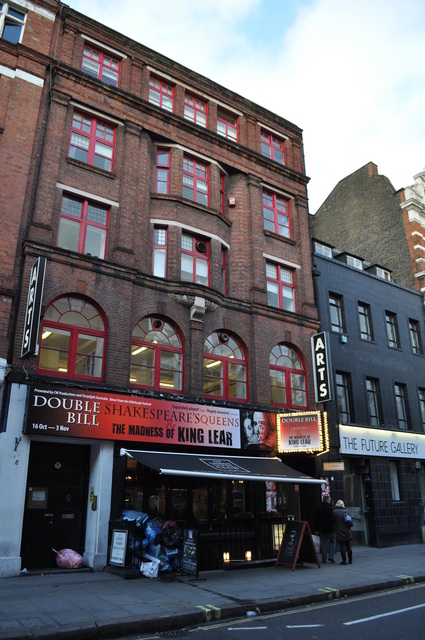 Located in London’s West End, close to Leicester Square Underground Station. The Arts Theatre Club was opened on 20th April 1927 with “Picnic”, an intimate revue. As it was a members only club, it was able to present ‘uncensored’ productions which had been banned by the Lord Chamberlain. The banned play “Young Woodley” was presented in February 1928 and in 1929 “People Like Us” was premiered to members, but it didn’t get a public production until 1948.

With the relaxation of live theatre censorship in the mid-1950’s, it began presenting plays such as the British premiere of Samuel Beckett’s play “Waiting for Godot” and “Waltz of the Toreadors”, and many productions transferred into larger West End theatres. In 1962, it was taken over by film producer Nat Cohen, and began screening foreign art house films. Cinema use possibly ended in 1963.

The Arts Theatre has since continued for several decades as a small scale independent live theatre, and is still known for its productions of unusual and sensitive subjects. The Arts Theatre underwent a restoration in 2010. The theatre boasts a tea room and a cocktail bar.

There is additional information related to and pictures of the Arts Theatre here and here.

The theatre is possibly up for redevelopment, plans seem to be progressing slowly for total demolition and basement replacement of a small theatre.