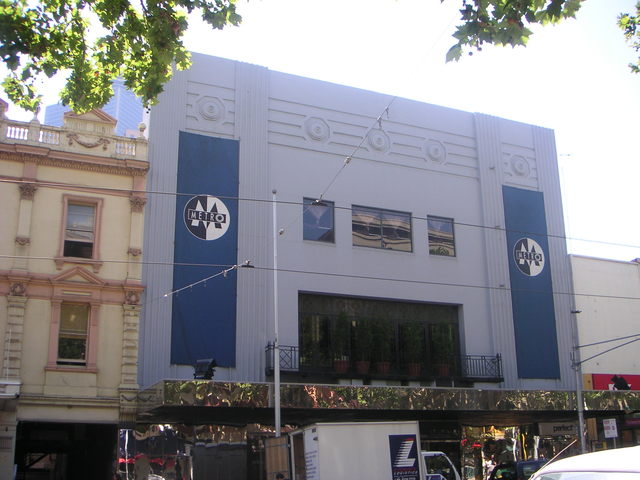 Originally a live theatre it opened on 6 April 1912 as the National Ampitheatre. Architect Henry E. White redesigned the interior in 1916 with the inclusion of six boxes on either side of the proscenium and seating in orchestra stalls, dress circle and upper circle, and from 1916 it was known as the Palace Theatre.

Further alterations were carried out in 1934 after which it was known as the Apollo Theatre. MGM bought the theater in 1940 and for the next thirty years operated as a cinema, and its name was changed again to the St. James Theatre.

MGM renamed it the Metro Theatre in 1952, not to be confused with the Metro Collins Street. Among the films screened during the 1950’s and 1960’s were “Gigi”, “North by Northwest”, “The Parent Trap”, “Mutiny on the Bounty”, “Ben Hur”, “Mary Poppins” and “Doctor Zhivago”. The latter film ran for over two years.

MGM sold the theater and the last MGM film screened was “Kelly’s Heroes” in October 1970. During the next few years it returned to live theatre which included a 39 week season of the musical “Hair” in 1971-72. It re-opened as the Palace Theatre in 1974 and once again showed films.

The church group known as the Revival Centre bought the theater in 1980 and then it was sold again in the late-1980’s and since 1987 it operated as the Metro nightclub.

In late-2007, the theatre was bought by the operators of the Palace Entertainment Complex previously located in St. Kilda. They undertook major renovations to restore many of the building’s original period features. The theatre reverted back to the name Palace Theatre, which it has been known as twice before in it long history. The Palace Theatre operated as a live music concert venue until it was closed in 2014. Plans for demolition were refused, and the possibility is now to be converted into retail use.

Sadly in July 2019, it was found that new owners of the building had turned on the water sprinklers and the interior of the building had collapsed by the time it was discovered. It was demolished in February 2020 for a hotel to be built on the site.

The Metro in Collins Street was also known as, and is listed on this website as, the Mayfair.

Recent photo of the Metro nightclub is here
View link

the website says the Palace is closing down? and they have a new home somewhere else?

this is unclear to me, whether Palaace to be demolished is the historic Art Deco theater or if Art Deco adjoining & to be saved?

The Palace nightclub refered to and pictured in the article was located in Melbourne suburb of St. Kilda, adjacent to the historic Palais Theatre. It was destroyed by fire a couple of months ago (the Palais was not affected and is being restored) and the operators of the former Palace Nightclub have now re-located to the former Metro Theatre in Bourke Street, re-naming it Palace Theatre, a name it had many years ago.

Building has recently been sold to developers and it looks like it may be demolished.

The building sadly closed in May 2014. Last thing I heard is that it will be turned into a retail space, after plans to demolish it to be turned into a hotel were denied by the council twice.

MELBOURNE’S century-old Palace Theatre will be demolished, after a council appeal to save the building was quashed by Victoria’s planning tribunal.

The Victorian Civil and Administrative Tribunal rejected heartfelt appeals from lovers of the entertainment and music precinct.

The theatre building will be replaced by a 12-storey hotel development, comprising 143 hotel rooms, a basement carpark and a “signature” bar and restaurant.