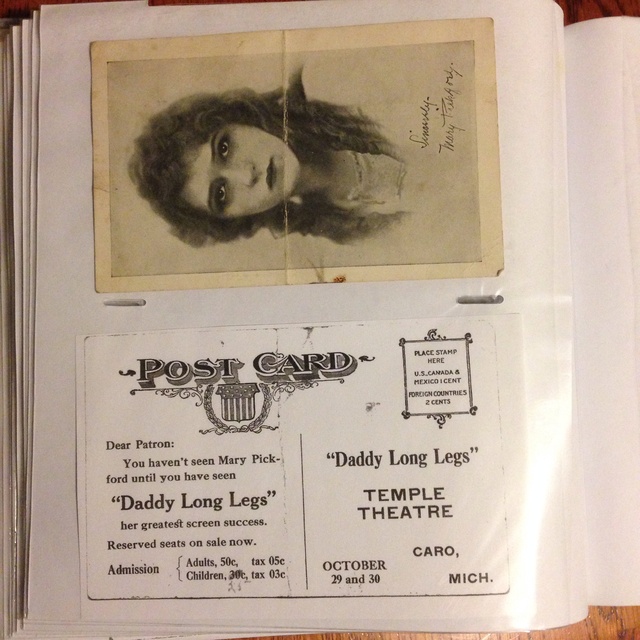 Built about 1892 for Jane Ryan, a milliner. Opened as the Temple Theatre in the early-20th Century. A 1959 fire damaged the theatre’s furnishings. It serves as a retail establishment in 2012.

This webpage about the Temple Theater in Caro shows the building at 137 N. State St. in Caro. It is a closed men’s clothing store. Although the photo shows a store to the right, the current Google Street View shows a vacant parcel, and the side of the building at 137 can be seen and it does not look like a former theater at all.

This page also indicates that the Temple was on Frank St. (though a commenter notes that the building pictured is on State). The still-operating Strand Theater in Caro is on the corner of Frank and State, with its left side frontage facing Frank. The Strand apparently opened in the 1920’s. I am wondering if the Strand was originally called the Temple or if the Strand was built on the site of the Temple.

Maybe we don’t know where this theater was, but we now know who operated it in the 1920s and 1930s. A December 25, 1942, item in the Cass City Chronicle notes the 50th wedding anniversary of Mr. and Mrs. F. H. Schuckert, who “…came to Caro in 1920 to operate the Temple Theatre, which they sold a few years ago.” As of 1942, Mr. Schukert and his son operated the Cass Theatre in Cass City and other eastern Michigan theaters the item doesn’t name.

The February 5, 1921, issue of The American Contractor has this item about a proposed theater in Caro, but I don’t know if the project was carried out:

The January, 1921, issue of The Michigan Architect and Engineer also mentions the project:

If this project was carried out, maybe the Temple Theatre moved from one location to another in 1921, which would account for the conflicting street locations. While I haven’t been able to confirm that the project was actually built, if it was built it wasn’t the building shown at Water Winter Wonderland. That building (which looks about 25 feet wide) was the original Temple Theatre, according to the caption of the photo on page 30 of The Caro Area, by Marcia M. Dievendorf, Patricia E. Frazer, and Mark O. Keller. The caption says that the Temple opened at that location in 1909, and was the first movie theater in Caro.

To add more confusion, the February 8, 1913, issue of Construction News carried another item about plans by the Temple Theatre Company:

Again, I’ve found no confirmation that this project was carried out, or, if it was, that it was not just a second theater for the same owners, in which case it most likely would have operated a different name. On the other hand, maybe the Temple operated in three different locations over the years: the building at 137 State Street from 1909 to 1913, at Frank and Almer Streets from 1913 to 1921, and another unknown location from 1921 on.

Google Street View reveals that the corner of Frank and Almer Streets is where the American Legion Hall is now located (110 W. Frank Street.) Perhaps the 1913 Temple Theatre project was carried out, but I can’t tell from Street View how old the Legion Hall building might be. It doesn’t look like it would date from 1913, but it could have been extensively remodeled.

Wherever the mysterious Temple Theatre was at the time, it suffered a fire in 1934, not 1959. It was a “25 Years Ago” feature in the January 29, 1959, issue of the Cass City Chronicle that said that an overheated furnace in the Temple Theatre had destroyed the theater’s furnishings and the household goods of the proprietor, F. H. Schuckert, who lived on the second floor. The 1934 event was noted in an issue of Michigan Manufacturer and Financial Record that year.

I’ve found no evidence that the Temple Theatre was still operating as late as 1959. The most recent mention of it I’ve found is an ad in the theater listings section of the Cass City Chronicle of March 21, 1947. It was showing two “B” pictures, a murder mystery and a western, and had a listing only for Friday, Saturday, and Sunday, while the Strand listed three single-feature programs of “A” pictures over the next week. It’s likely that the Temple didn’t survive into the CinemaScope era. Small theaters, especially part-time, late-run and “B” houses in small towns, were closed by the thousands in the mid-1950s because they couldn’t afford the new wide-screen equipment, if they even had room for wide screens.

My second indented quote in the previous comment should start with “VAN LEYEN” (I want the edit function back!)

Also, I see that Street View is currently set on the Masonic Temple building, which is across the street and up the block from 137 State Street. Many towns had houses called the Temple Theatre that were located in Masonic Temple buildings, but Caro does not appear to have been one of them. The building at 137 is where the Temple Theatre was located from 1909 until at least 1913.

This .pdf of a page from the Cass City Chronicle edition of December 13, 1946 includes an ad for the Temple.

That recently posted B&W photo is more than a little intriguing; I wish the view was from a different angle. I cannot tell if the sign reading “Double Feature” and the canopy are attached to the building with bay window or to the building next to it which is slightly taller and of a different architectural style.

CSW: The 1909 picture in the book I linked to in my previous comment makes it clear that the Temple Theatre was in the taller building next door to the one with the bay window.

The cars in the photo recently uploaded here shows that there was still a theater in the building around 1940. That indicates that the proposed theater projects of 1913 and 1921 were probably never carried out (unless there was once a third theater at Caro, or if one of them was the original Strand Theatre.)

I’ve talked with people who lived in the Thumb for years (my mother is from not too far from Caro) and no one seems to recall the Temple. Any speculation that it was the same place as the Strand seems to be debunked by seeing newspaper ads of the same week showing both theaters in separate ads, and by a mid-1940s Film Daily entry showing the Strand at 450 seats and the Temple at 320 seats. I’ve found newspaper ads for the Temple through at least 1952.

The Temple Theatre building was last owned by Reginald and Richard Ashman of Caro, Michigan. They leased the building and it was used as a men’s clothing store called Fred’s. He was a friend of the Ashman brothers and was part of a group of local businessmen who played cards together. I was fortunate to be a distant relative of the Ashman brothers and worked at both the Strand and Caro Drive In. I also had the opportunity to visit the up stair location of Fred’s Men’s Wear and saw a large number of old fliers, an arc projector (that I was told was the first one used at the Strand and then moved to storage), and I also saw a number of old canisters that were used to transport film. I can not say for a fact that the location of the store and the theatre were one in the same.