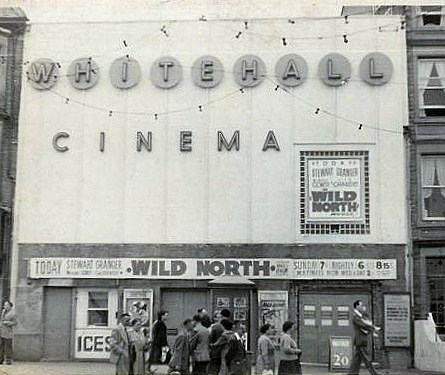 Located in the Lancashire sea-side town of Morecambe. This building was originally built as the Pavilion for an attraction named Warwick’s ‘Revolving’ Tower (similar to the famous Blackpool Tower in nearby Blackpool). The Tower was sold in 1903, and was dismantled. The Pavilion was converted into a skating rink, and then a dance hall.

In 1945, the Whitehall Cinema was screening films, and had some live show use on its stage. The Whitehall Cinema was closed on 22nd October 1955 with Hedy Lamarr in “The Face That Launched a Thousand Ships”(L'amante di Paride). It was converted into a bingo club, then by 1988 had become a J. Tussaud Waxworks, and by 1993 was a Megazone laser game show. It was demolished in 2015.

A report on BBC news, there has been a large fire at this place.

Here is a link to the article.